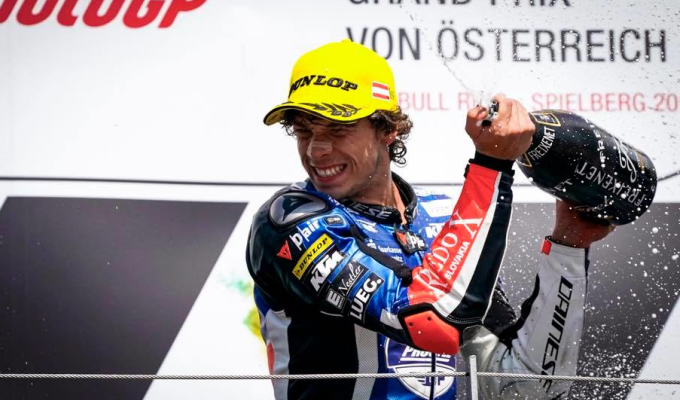 Marco Bezzecchi extended his lead in the Moto3 World Championship after a superb display at the Red Bull Ring, despite a heroic ride from Jorge Martin.

After claiming the pole position by less than a tenth from Martin, the Italian set about hunting his second win of the season. Getting the whole shot from the line, Bezzecchi went from the off and tried to prevent a big group of riders from forming a leading group and after three laps he already had already reduced the leading gap to just four riders made up of Martin, Albert Arenas and Gabi Rodrigo.

Just eighth days after having surgery on his broken left radius, Martin fought through the pain to stay in the leading group despite Masia attempting to move under him on more than on occasion. With three laps to go Martin moved under Bezzecchi to take the lead albeit for the Italian to re-take the lead just one corner late. Bezzecchi would then pull the pin and go on to win the race untouched, to extend his lead in the World Championship to twelve points.

Behind the Italian the drama was just starting. With three laps to go Bastianini was two seconds off the leading group, however by the time the final lap started, ’the Beast’ had fought past Arenas and was fighting with Martin and Masia who had moved into second position.

Bastianini moved under Martin in turn four and then went under Masia in the penultimate corner, pushing the Spanish teenager wide allowing Martin to slide under and take the final spot on the podium.

Albert Arenas was fourth, holding off the charging Lorenzo Dalla Porta whilst the re-joining Masia came home in sixth. Ayumu Sasaki came out on top of a seven-man fight for seventh position, just a tenth ahead of Rodrigo with Tony Arbolino, Aron Canet, Fabio Di Giannantono, John McPhee and Jakub Kornfeil rounding out the group in thirteenth position.

McPhee was leading that group into the final corner after fighting through from last place on the grid, however an overly ambitious move from Di Giannantonio in the final nearly took the pair out. Thankfully they stayed upright but did end up outside the top ten.