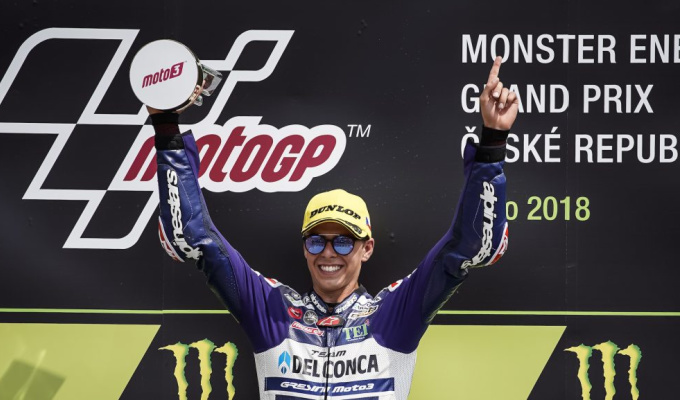 With the Jorge Martin back in Barcelona having his wrist surgically repaired, there was an opportunity for a lot of riders to get themselves back in the World Championship hunt.

Pole sitter Jakub Kornfiel took the hole-shot and was the early race leader. The Czech striker never truly managed to pull away from the field and the Czech rider lost the lead after four laps. Halfway through the race the top 22 riders were separated by just 2.5 seconds but with three laps to go Di Giannantonio took to the front and tried to stretch the field. With aggressive block passes and a desire to be leading, Di Giannantonio kept the lead to claim his first every Moto3 victory by just 0.112 seconds.

Marco Bezzecchi salvaged sixth position and in doing so the Italian reclaimed the lead in the World Championship by just three points. With Martin hoping to return next week in Austria, Bezzecchi will be glad he retook the lead, but disappointed he couldn’t get more than the 10 points he did. Marcos Ramirez was seventh after leading in the early stages with Phillipp Oettl, Albert Arenas and Lorenzo Dalla Porta rounding out the top ten.

It was ultimately a disappointing race for John McPhee. Starting from the middle of the front row and looking extremely competitive in the early stages of the race, the Scot eventually crashed out at the final corner halfway through the race after coming together with Ramirez.