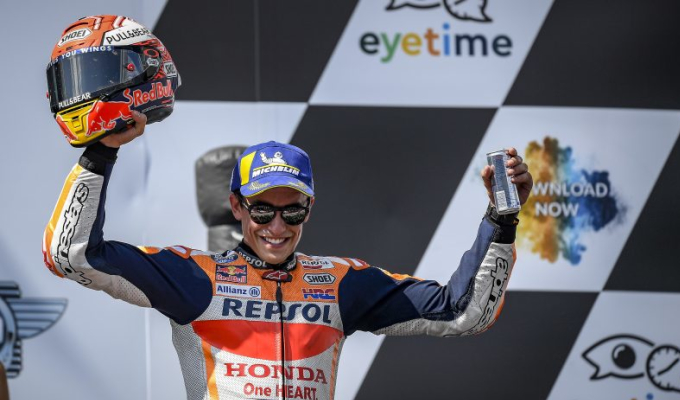 Marc Marquez has revealed his plan going into the Austrian MotoGP at the Red Bull Ring was to try and make the fight for the win against just one of the two factory Ducatis.

The World Champion started alongside the factory Ducati duo of Andrea Dovizioso and Jorge Lorenzo from the pole position and after two wins in the two years since MotoGP returned to Austria, the Italian factory were favourites to make it a hat trick.

Marquez, fully aware of the strength of the two red bike said he wanted to try and break one of them early and only fight with one for the win.

“Today I tried. In Brno I didn’t try because I didn’t feel well and it was a waste of time there because there was more chance to lose than to win,” said the Spaniard.

“But today I tried to change my strategy and push a lot from the beginning because the goal was to try to arrive at the end with only one Ducati. Because a fight against Ducati I know it’s quite difficult for us, but we achieved our goal, which was to fight against just one Ducati. I expected after the rhythms that it would be Dovi, but this time was Jorge.

“I try because I’m Marc and I need to try, but every short straight he was able to overtake or to be parallel and it was really difficult to defend, but even like this I try to lead the race in the last lap.

“He overtook me in the main straight. Then I try again in turn three, I lost the two tyres, I went in too fast and lost two tyres and nearly crash and then I stay on the bike. I don’t know why but I stayed there. He overtook me in acceleration on the outside because he carried more speed. But if he didn’t overtake me there he would’ve been turn eight and nine, but I tried and I enjoyed it a lot and we increase the points in the championship.”