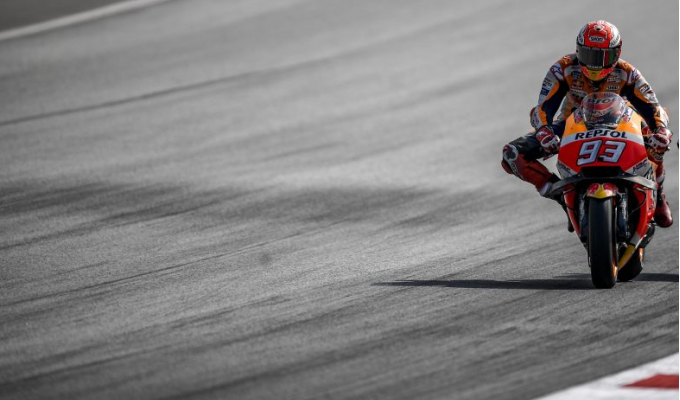 The Red Bull Ring which has become a Ducati stronghold over the two years since MotoGP returned to Austria and this afternoon looked as if it would be a battle between the factory Ducati duo of Dovizioso and Jorge Lorenzo with Marquez in the mix, but it became evident early that Marquez was the man to beat.

The World Champion was the fastest of the riders on their opening stints and only went faster from there. Both Marquez and Dovi were on two run strategies whilst Lorenzo went with a third run, however nobody could beat the Honda rider when it came to it.

Marquez’ pole time of a 1:23,241 was just 6 thousandths off of last years pole time but good enough to hold on to it by just 0.002 despite a superb late lap from Dovizioso. Lorenzo was a further tenth behind his team-mate to start from the outside of the front row.

It was another factory Ducati in fourth with Danilo Petrucci putting his Pramac bike at the head of the second row and the Italian will be joined by Cal Crutchlow and Johann Zarco on the second row.

Tito Rabat made it four Ducati’s in the top seven with 2016 winner Andrea Iannone in eighth and Dani Pedrosa ninth.

It was a day to forget for Valentino Rossi. Failing to get through Q1, the Italian will be forced to start from the middle of the fifth row in fourteenth position for tomorrows race.