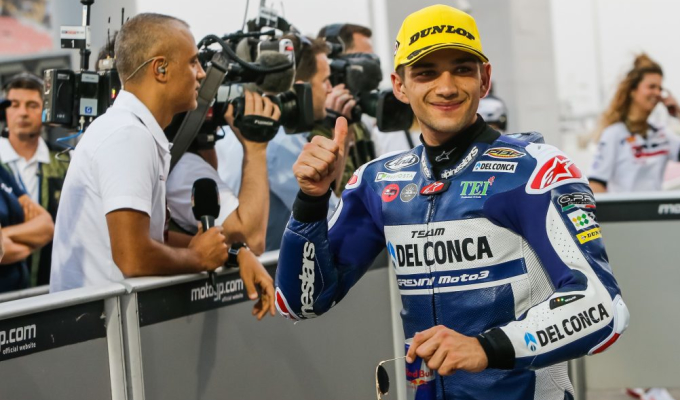 Moto3 World Championship favourite Jorge Martin held his nerve in a cat-and-mouse race, pipping Aron Canet to the flag in the Qatar sun.

In the familiar surroundings of the Losail International circuit, the sun was a rare change with the schedule moved forward to avoid evening dew.

Starting from the middle of the front row, Martin showed the pace he had shown all weekend and wasted little time in trying to break away at the front. Behind Martin Canet and Bastianini managed to break away from the chaotic pack and form a front three breakaway.

However the three became a two after six laps when Bastianini lost the front end of his Honda bike at turn six. He walked away but his race was over.

The two Spainards continued to edge away from the chasing pack and despite letting Canet lead for a few laps, it never looked like Martin was in any danger of surrendering control of the race. The cat-and-mouse games continued until the final corner when Canet’s plan was to out-drag Martin to the line, however he came up just short, allowing Martin to make it back-to-back wins after his victory in Valencia last year.

Behind the front two, Lorenzo Dalla Porta came out on top of a manic twelve man group to join the Spaniards on the podium. Dalla Porta managed to snatch the podium from fourth placed Antonelli, Rodrigo, Di Gianantonio and Toba. Sasaki was eighth with Kornfiel and Migno rounding out the top ten.