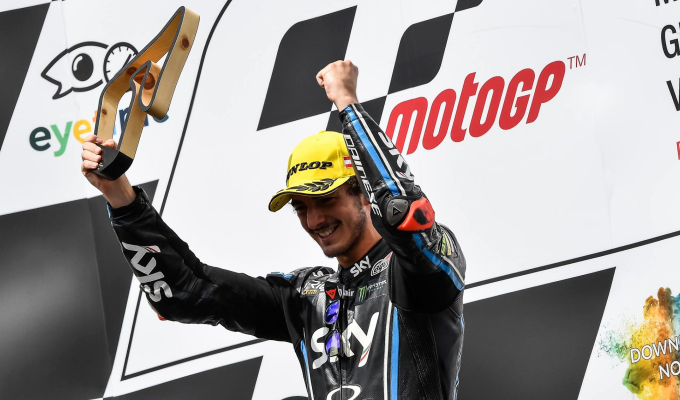 The Championship pair came into the race separated by just two points and starting from first and second positions. After both getting strong starts off the line, Bagnaia was lucky to not stay on his bike after contact between him and Quartararo.

With Oliveira leading, Bagnaia moved past Jorge Navarro and set about closing the second gap that the KTM rider had pulled. It was soon closed and it became clear that both riders were waiting for the final few laps before making moves for the victory.

Going into the final lap Bagnaia looked like he was going to line up for a move at the end of the straight into turn three. The KTM got out of the corner well and going into the final sector it looked as if Oliveira may have the victory into the bag. Going into the penultimate corner, Bagnaia once again went under the KTM man, only for Olivera to fight straight back. This time however, the Sky VR46 man, set himself up on the inside and managed to run Olivera out wide and take the victory.

Bagnaia’s young teammate Luca Marini backed up his Brno second place with a podium once again in Austria after Alex Marquez crashed in the final corner allowing the Italian to capitalise.

Mattia Pasini was fourth ahead of Jorge Navarro who seems to have got the message after rumours Gresini were considering replacing him in 2019. Brad Binder was sixth with Marcel Schrotter, Joan Mir, Fabio Quartararo and Iker Lecuona rounding out the top ten.