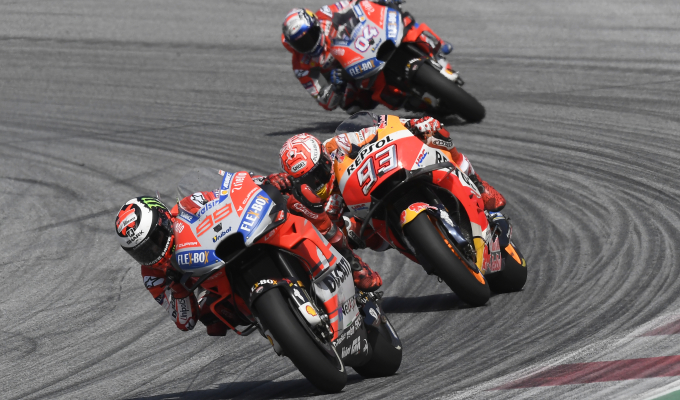 Jorge Lorenzo overcame an intense battle with Marc Marquez to win his third MotoGP of 2018 this afternoon at the Red Bull Ring.

The Spaniard produced a brilliant display whilst battling with Marc Marquez for the victory, eventually coming out after retaking the lead on the final lap and holding off the surging World Champion. It was Lorenzo’s third victory since last seasons move to Ducati and Lorenzo was very happy with how the afternoon panned out.

“Yes, it’s one of my best victories, but I don’t know my best one because luckily I have some beautiful ones in my past, not only in MotoGP but also in other categories,” Lorenzo said after the race.

“But for sure when you always beat Marc it’s special and when you win with Ducati it’s special, so this victory is going to be one of the special ones, apart from the first in Mugello.

“Especially because I had to fight until the end with a monster like Marc, a fighter like Marc until the last lap. Braking very hard and taking profit of my strong points so it’s always very difficult.”

The five-time World Champion gambled on using soft compound tyres on the front and rear of his Ducati and it was a gamble that paid off.

“It was also key the big improve I made in sector three because yesterday I was losing almost two tenths there compared to Marc and Dovi. But then I made a big improvement in just one afternoon; trying to watch some videos to try to understand which position of my body I need to change to be faster in that sector. In the race I was improving in that sector and I was catching Marc in that sector where I was losing a lot last year.

“Also this management of the tyre in the beginning not so much because Marc was pushing so hard with the hard rear tyre so probably I was saving three perfect to five perfect not so much, but enough to keep the like of the tyre very well and wait for my moment.

“When Marc started to lose a little bit of breaking, stopping and especially acceleration I was starting catching him little by little so we went from 1.2 disadvantage to zero. The problem as always when you overtake Marc is that Marc is with you till the end and he push so much so I knew I had to fight until the end with him. So was a fight of two riders until the last corner.”