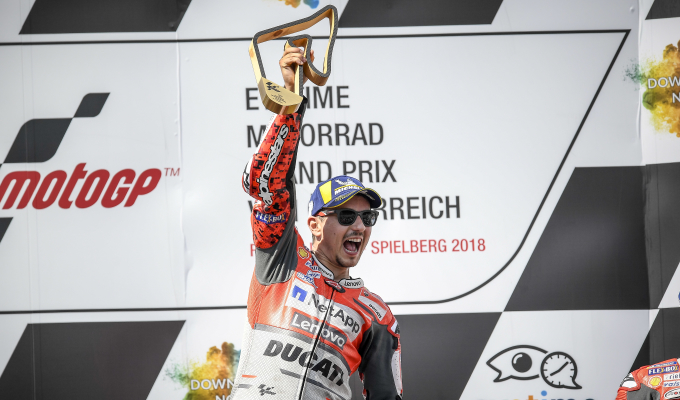 Jorge Lorenzo beat Marc Marquez in an intense battle to win his third MotoGP race of 2018.

Starting from the outside of the front row, despite not leading into the first corner, the Spaniard found himself leading after Marc Marquez ran hot into turn three forcing early leader and pole sitter Andrea Dovizioso wide. However, just one lap later Marquez went under Lorenzo into turn three to take the lead.

Marquez who had elected to run a hard-hard tyre combination had hoped to push Lorenzo’s soft-soft combination into submission with a string of blistering laps in the early stages of the race. By the half race stage Marquez had a gap of around a second from Lorenzo who appeared to be holding his team-mate up.

However, when the race entered its second half, Lorenzo managed to edge closer to the leader and eventually closed the gap right down and took the lead into the first corner with 10 laps to go. In the same move, Dovizioso was pushed wide and lost over a second to the front two.

Lorenzo’s lead lasted one corner as Marquez moved back past him. The factory Ducati man held sat behind the World Champion for six laps which saw the first two drop Dovi. With just over three laps to go, Lorenzo made an extremely aggressive pass on Marquez into the downhill turn nine, nearly forcing Marquez off the track. The Honda man then lined Lorenzo up and repaid the favour in his usual spot in turn three with an equally aggressive move.

Going into the final lap Lorenzo moved under Marquez going into turn one and then took a started the drag up to turn three and braced himself for an attack from Marquez. Marquez retook the lead in turn three but Lorenzo managed to keep his GP18 lit and went back around Marquez and kept hold of the lead. Lorenzo held off a late charge to claim his third win on a Ducati by 0.130 seconds.

Andrea Dovizioso was third but 1.6 seconds behind the front two after his medium compound Michelin tyre didn’t give him the feel he had hoped for in the final five laps.

Cal Crutchlow was the top independent team rider in fourth place on his LCR Honda, albeit a further eight seconds behind Dovizioso. The

Brit was a further four seconds ahead of Petrucci in what ended up being a lonely race for Crutchlow.

Valentino Rossi salvaged sixth position from his disastrous weekend to keep hold of second place in the World Championship with Alex Rins, Johann Zarco and Alvaro Bautista rounding out the top ten.

Tito Rabat was eleventh place on his satellite Ducati, whilst Maverick Vinales miserable season continued with a twelfth place finish. 2016 Austrian Grand Prix winner Andrea Iannone was thirteenth on his GSX-RR Suzuki with the sole KTM of Bradley Smith in fourteenth position. Taka Nakagami rounded out the point scorers, piping Syahrin to fifteenth.