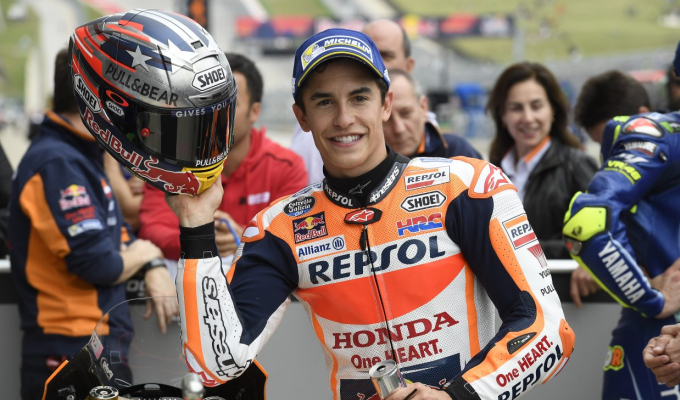 The 2017 MotoGP World Championship is alive and kicking as Marc Marquez won once again in America, whilst series leader Maverick Viñales crashed out in the early stages of the race.

Marquez converted his pole position into victory, despite an early fight with his team mate, Dani Pedrosa, Marquez continued his remarkable run in America with his fifth win from five at the Circuit of the Americas and the last nine races on American soil, to reduce the gap to new World Championship series leader, and second place finisher Valentino Rossi to 18 points.

Dani Pedrosa claimed his first podium of the season with an impressive ride ahead of the top independent team rider Cal Crutchlow who beat out Johann Zarco on the final lap of the race.

The biggest drama of the race happened on the third lap when series leader coming into the weekend Viñales ran wide and lost the front end of his Yamaha M1. Whilst walking away from the crash unharmed, his championship lead took a significant dent.

Andrea Dovizioso was top Ducati in sixth position ahead of his former team-mate Andrea Iannone and a late surging Danilo Petrucci who pipped Jorge Lorenzo to eighth, whilst Jack Miller rounded out the top 10.

Jonas Folger was eleventh place and just ahead of Scott Redding. Whilst Tito Rabat, Hector Barbera and Alvaro Bautista rounded out the finishers.