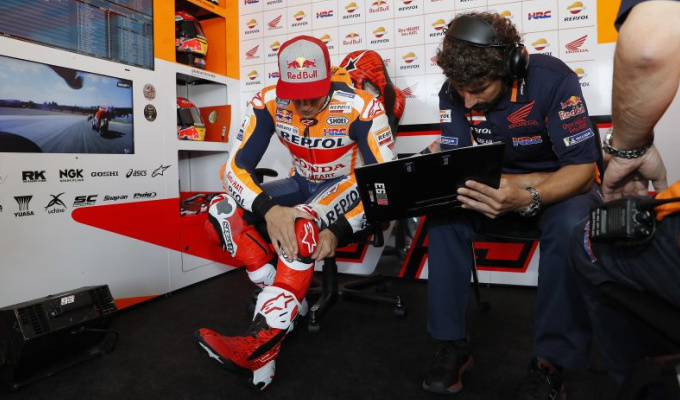 Marc Marquez topped the post-race test in Brno after working on some ‘important’ parts on his Honda RC213V, ahead of Johann Zarco and Dani Pedorsa.

The World Champion waited until the latter stages of the day to post his fastest time of the day, a 1:55.209 which was just under a tenth and a half faster than the Frenchman’s best effort. Marquez didn’t reveal what he was working on today, but he did reveal he was testing the new Michelin tyre.

“Today was positive and I’m very happy because we did a lot of laps with a good feeling since the start of the test,” said Marquez.

“We started early this morning and we went on until the evening with a new thing to try in every run. It’s tough when you have such a busy schedule, but Honda is working hard and that’s great motivation for a rider; we did a great job in testing everything that they brought here to Brno.

“Michelin is also working hard towards the future and brought a new front tyre here to test. Honestly it didn’t work as we were hoping for but it’s very good for us to see how much effort they give in trying to always improve, and surely today they gathered some useful information.

“As usual, towards the end of the day we put all of the best things together and we’ve done a good lap time. The fastest lap wasn’t the main target though, as it was more important to work for the future. In the end we’ve found several positive things and we’ll use something in the next race. I’m happy with the direction we’re taking and with the work we’re doing.”

Behind the front three, Brno race winner Andrea Dovizioso was fourth fastest and less than a tenth ahead of his Ducati team-mate Jorge Lorenzo. The Ducati duo didn’t have any major upgrades to set, instead working on new aero packages and fine tuning their GP18’s.

Cal Crutchlow was sixth and testing new parts for HRC, although the Brit didn’t chose to test the new Michelin tyre. Valentino Rossi was seventh and the only factory Yamaha on track today with Maverick Vinales sidelined after a tough crash in Sundays race. Rossi didn’t specify what he was working on, but Yamaha were said to be working on a new electronics package going into the seconds half of the season.

Danilo Petrucci was eighth on his Pramac Ducati with the factory Suzuki’s of Alex Rins (ninth) and Andrea Iannone (eleventh) sandwiching Hafizh Syahrin on his Tech3 Yamaha. The Ecstar Suzuki duo were working on electronics upgrades as well as a new chassis.