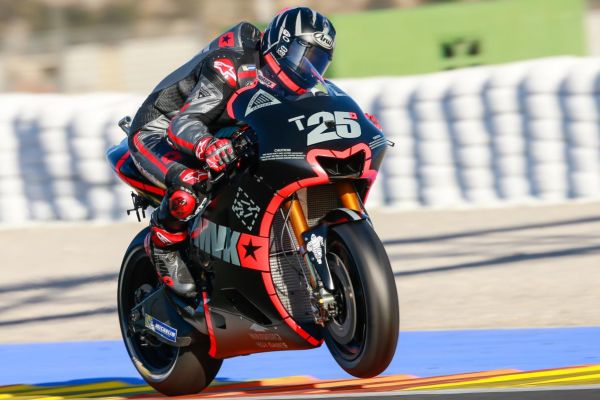 Maverick Viñales built on his impressive first day on the Yamaha to end the first test of 2017 fastest overall, ahead of Marc Marquez and Andrea Dovizioso.

After an impressive debut performance on Tuesday, Viñales was back on his 2016 Yamaha YZR-M1 and continued to impress with the times he could post. Viñales’ best time of the day was a 1:29.975, making him the only man to lap in the 1:29’s.

Viñales’ fastest lap time was set with the new structured Michelin front tyre for 2017. Even with the new front tyre, the 21-year-old’s time would’ve put him in third position for last Sunday’s Valencia Grand Prix, faster than the quickest time he managed to post all weekend on the Suzuki.

Behind Viñales was reigning World Champion Marc Marquez. Marquez continued to work on different combinations of a 2016 and 2017 bike, working with the new user-friendly Honda engine. Marquez didn’t go out to post a quick lap as such, but did improve on his laptime from Tuesday.

Marquez did suffer a small spill at T2 when the rear end of his Honda snapped around, forcing him to go straight on. When trying to come around back onto the track, Marquez gave a handful of throttle and fell off his bike. He and the bike were unharmed but it was a slight embarassment for the World Champion.

Andrea Dovizioso and the brand-new Ducati GP17 posted the third fastest lap of the day. Still fully equppied with the winglets, Dovi got some extensive work with the 2017 reincarnation of the Desmosedici. Dovi, much like Viñales, posted his fastest laptime of the day with the new front tyre. Dovizioso will be heading down to Jerez with Ducati to continue their development on the GP17.

New factory Suzuki rider Andrea Iannone shook off his second fast crash in as many days to post the fourth fastest lap of the day. Iannone lost the front end of the Suzuki GSX-RR at the fast T12, whilst stopping in the gravel, Iannone’s bike destroyed the tyre wall, prompting a red flag and the session to be stopped whilst the tyre wall was reconstructed and extra padding was added for rider safety. With Iannone destorying a second set of leathers, the Maniac actually posted his fastest lap of the test in a set of “stock” Dainese leathers.

The Honda duo of Dani Pedrosa and Cal Crutchlow were fifth and sixth fastest respectfully. Pedrosa said he was able to get a good idea of how the 2017 RC213V feels. Whilst saying it was too early to say anything for sure about the new engine, a softer power delivery would help Pedrosa maybe more than any of the other Honda riders. Crutchlow continued to work closely with the HRC factory and continued to test more factory parts in his LCR team.

Valentino Rossi was seventh fastest and three quarters of a second behind the fastest time set by his team-mate. Whilst Viñales’ priority was to get comfortable on the Yamaha, Rossi’s was so start working intenselty on the 2017 M1 and that is exactly what the Doctor did. Rossi was unimpressed by the lack of 2017 updates yesterday and said he hopes what he gets in Malaysia is an improvement.

Ducati’s big money signing Jorge Lorenzo was eighth fastest as he got his first proper taste of the GP17. Much like his team-mate, Lorenzo lapped with winglets fitted to his GP17 as he continues his gradual transition over to the very different Desmosedici. Unlike Dovizioso, Lorenzo won’t be going to Jerez and his winter begins now, with Yamaha refusing to budge on thier stance of refusing on letting him have a second test.

Aleix Espargaro enjoyed a strong day on the Aprilia RS-GP and ended the day less than a second behind Viñales. Espargaro’s fastest lap of the day was also just 0.1 seconds behind the fastest time he managed through all four practice sessions on the Suzuki last weekend.

Jonas Folger rounded out the top ten and was the fastest of the three rookies who rode today. Folger’s best time of the day was within a second of the fastest time set on the day and was seven tenths faster than the best time of his Tech3 team-mate and fellow rookie Johann Zarco. The Tech3 duo with join Viñales and Rossi in Sepang next week for one final test in 2016 before the winter testing ban comes into effect.

Pol Espargaro and his KTM was 17th fastest and less than two seconds behind Viñales. Both Espargaro and Smith (20th) said the KTM was very different to any bike they had ever ridden, so expect both of them to improve with every session on the new RC16.

Two riders with limited to no action today were rookie Alex Rins and Sam Lowes. Rins was taken to hospital with two broken bones in his back after a fast crash at T12, whilst Lowes was forced to sit the day out after spending time in hospital himself after his own crash at T12 yesterday.

Jerez or Sepang now awaits for teams wanting to get final sessions in before December first comes around and the winter tester ban comes into effect.