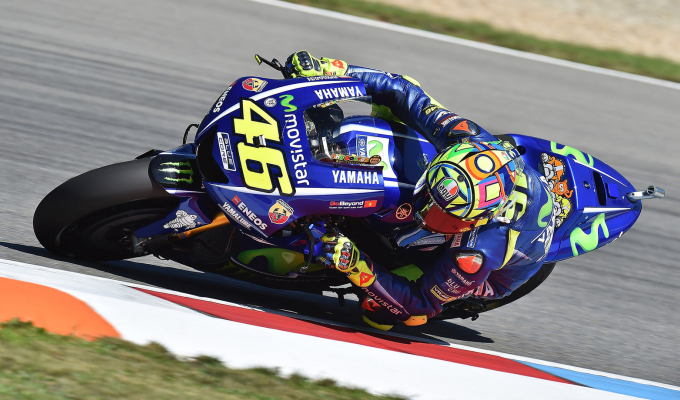 A late lap from Valentino Rossi was good enough to top the time sheets on the Brno post-race test from Marc Marquez and Maverick Viñales.

The Italian ended up finishing yesterdays Czech Grand Prix after failing to switch bikes, a recurring theme with Rossi and his team in flag-to-flag races. However, Rossi attempted to put the disappointment behind him by topping todays test.

Rossi’s best time was a 1:55.162 which was less than a tenth slower than his qualifying time which was good enough to start Sunday’s race in second position. Rossi and team-mate Viñales were testing an array of new pieces including new Ohlins suspension and a new aero fairing, although Rossi’s fastest time of the day wasn’t used with the new fairing. The Italian’s best lap of the day was on his 51st of 52 as he sat the majority of the morning out.

Marquez was second fastest and yesterdays race winner was sat top of the timing sheets for a lot of the afternoon before Rossi’s lap time right at the end of the day. Marquez was just 0.018 behind Rossi and overall satisfied with his days work. Viñales was testing many of the same pieces as Rossi and ended the day third fastest, completing the second most laps of the day with 69.

Jorge Lorenzo built on his strong weekend, showing he is coming to grips with the Desmosedici. The former World Champion was continuing to test new aero parts as well as further parts on his GP17 as he looks towards the Red Bull Ring next weekend. Johann Zarco was fifth and half a second behind Rossi, just ahead of Crutchlow and Pedrosa who were sixth and seventh respectively.

Jonas Folger, Andrea Iannone and Aleix Espargaro rounded out the top ten. Iannone suffered a small crash in the morning but returned to the pit unharmed. Dovizioso was using the new front fairing much like Lorenzo had over the weekend and he was 1.2 seconds off the pace in eleventh position.

The paddock will now pack up and make the short trip to Spielberg for this weekends Austrian Grand Prix where Ducati will be hoping to replicate the dominance of last year.