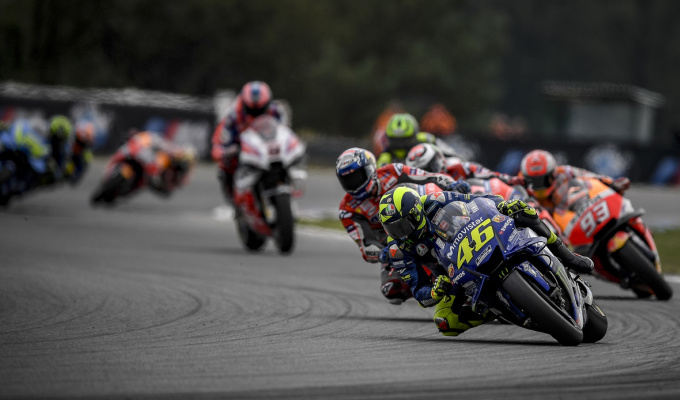 Valentino Rossi said that a lack of rear tyre grip prevented him from fighting for the podium in todays Czech MotoGP.

The Italian finished fourth after an moving past Cal Crutchlow in the final corner to take first place off the podium. Despite finishing just over three seconds off race winner Andrea Dovizioso, Rossi said a lack of rear grip cost him from being even closer to the front.

“You know, I think my race was very good,” Rossi said. “Also the start and on the first lap I was competitive and I stayed in front. But unfortunately when the rear tyre lost a little bit of grip and start to slide, for us it’s difficult the acceleration, we started to lose there. Unfortunately I wasn’t strong enough for the podium. After the practice we knew.

“We know that Marquez and the two Ducatis were stronger than me. I used the hard rear that was the right choice. I had a very good battle with Crutchlow and at the end I was able to overtake him. Unfortunately it was not enough for the podium.

“I expected a faster race. But everybody managed their tyres. If you push one hundred percent, it’s possible that you have a lot of trouble. With a little bit less temperature it was a bit more easy, but not a big difference.”

The first half of todays race had both factory Ducati’s, Marc Marquez, Crutchlow and Rossi all closely. This allowed ‘the Doctor’ the opportunity to sit and learn from the other bikes to see where he was lacking.

“When they opened the throttle they’re able to accelerate in a better way,” he said. “They’re able to use the tyre in a better way and this is where we suffer. Our bike, in terms of balance and mechanically is very good. In fact, in the qualifying we are always competitive. But in the second half of the race unfortunately we have to improve.”