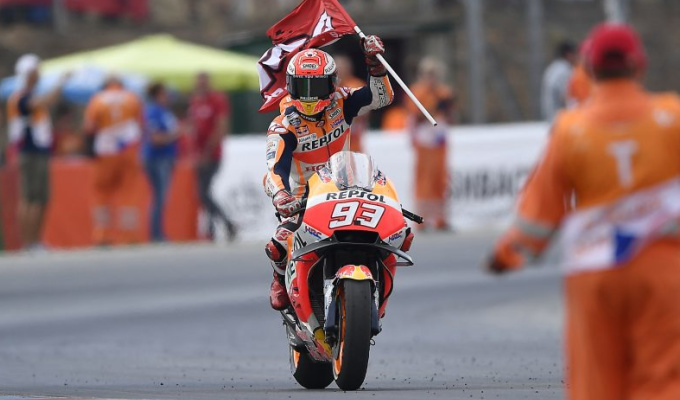 The Repsol Honda rider finished third, behind the factory Ducati duo of Andrea Dovizioso and Jorge Lorenzo. Despite finishing third the Spaniard extended his lead in the MotoGP World Championship over Valentino Rossi to 49 points.

“I mean the race was slow but for me it was welcome,” said the six-time World Champion. “If you’re slow, then less risk, so more chance to finish the race in a good way. So for me, yeah I see the pace was slow but I say okay, I will be behind them.

“Because to be in front you have to take a lot more risks and we thought without the slipstream I might be able to be a little bit more faster but there was a lot more risk. So I saw the pace was slow, but for me was not a problem because my target is finish all the races. Worst result of the year of the finished races, but this is positive.”

Despite finishing just 0.368 seconds behind the World Champion said that the Ducati’s always had the edge with acceleration and braking stability.

“Honestly during the race I feel quite good, I feel strong with the bike, and the speed was good,” he said. “I was able to ride well and save the tyres.

“But the problem arrived when you need to fight against Ducati riders because they have a really strong acceleration. More than acceleration, the top speed and a really strong brake point so it was so difficult to overtake them, but I say ‘OK, I will try, but don’t be crazy’.

“The good thing is that Valentino was already behind and my main target was to try and increase my advantage in the championship and I did. We know that it’s okay that Andrea gained some points and Jorge, but they are still 68 points behind me, so we are on the way. I’m happy because this one is a circuit that I struggle a little bit every year and we finish so close to the victory so this is the most important.”