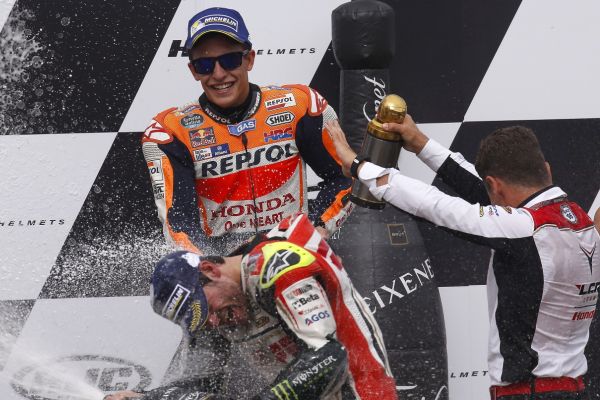 Marquez was one of the early pace setters and set about chasing the three Ducati’s who were the leaders in the opening stages of the race. However, Marquez suffered the same fate as all of the other riders who had elected to run the softer compound rain tyre, as opposed to the hard tyre.

At the halfway point of the race, the Spaniard saw his tyres severely lose grip, whilst having to fend off the advances of riders who had gambled with the hard tyres.

Marquez eventually held off the satellite Ducati trio of Loris Baz, Hector Barbera and Eugene Laverty to claim the final spot on the podium, and as a result, extend his lead at the top of the MotoGP World Championship to 53 points ahead of Valentino Rossi.

“I’m happy with the end result because the most important thing is that today I extended my advantage over second in the overall standings, as I only dropped four points to Valentino [Rossi] while Jorge [Lorenzo] didn’t score points,” said the 23-year-old.

“We proved that we’re competitive both in dry and wet conditions. This year we’re working like ants, making gradual, steady improvements and having a very complete season without changing our mindset.

“I made a mistake with the tyres choice, but it’s easier to judge things in hindsight. Perhaps the best choice was the hard compound on both the front and rear, but I was expecting a flag-to-flag race since the track normally dries quickly, which wasn’t the case today.

“When I saw that there was less than 10 laps to go and the track was still wet, I started to manage my tyre wear. I saw that [Cal] Crutchlow and Rossi had a faster pace, so I concentrated on my other rivals and I can say I won the battle with them.”