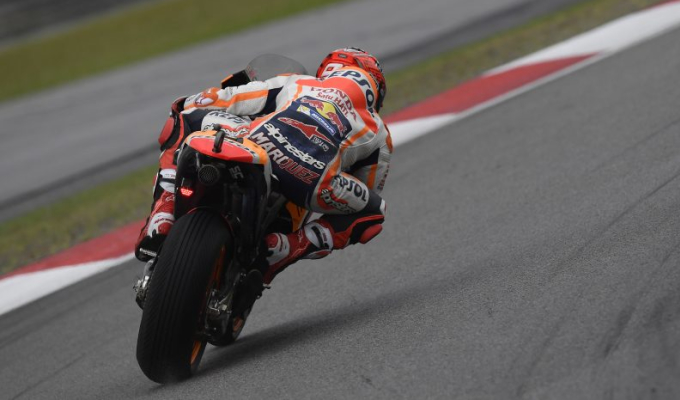 Marc Marquez admitted he didn’t have the pace to stay with the Ducati’s deciding to play the long game and take his chances of winning the World Championship in Valencia next time out.

Marquez came into the weekend knowing that a second place finish would guarantee him a fourth MotoGP World Championship. Despite knowing this, Marquez could only muster a fourth position finish, coupled with Dovizioso’s win, this meant the Spaniard would have to wait until Valencia to retain his World Championship.

Marquez never looked likely to claim the World Championship, struggling all weekend and after being passed by Dovizioso in the early stages, it became apparent to Marquez that he wasn’t able to stay with the Ducati’s.

“Today the race was the most difficult one we could have had for the Championship because we had rain conditions and the track was extremely slippery,” said Marquez.

“Anyway, I got a good start, and I tried to push at the beginning because I didn’t want to be stuck in the middle of the group. Then I tried to find the feeling and the pace but I saw that both the Ducatis were very fast, so I decided to not take too many risks, to be calm, and to get good points for the Championship.”

Marquez considered trying to stay with third placed Johann Zarco, but he soon decided that the risk required for the extra three points it would’ve earned him wasn’t worth the risk.

“I thought about trying to get Zarco but the risk was too big just to have an advantage of 24 points instead of 21,”he said. “This wasn’t the race to win the title but rather one to get closer to it.

“I’m happy because after a difficult weekend, at a track where we always struggle, we still managed to finish fourth. Of course now we need to keep focused, to train well this week, and to work to be at 100% on Sunday in Valencia without relaxing too much with the advantage we have.”