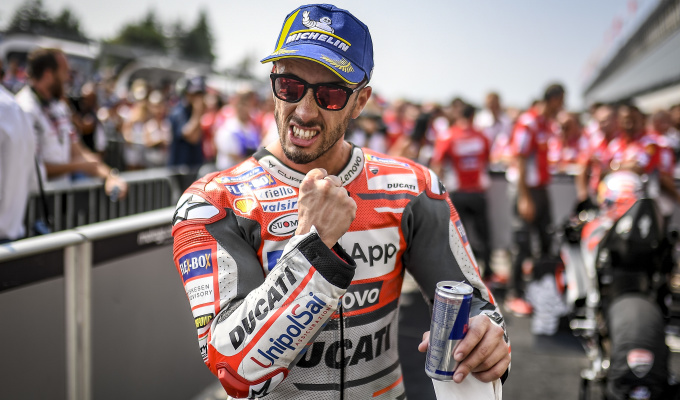 Andrea Dovizioso said that fears over tyre consumption was the rear for today’s slower race.

For over half of the race the leaders were running around two seconds a lap slower than the qualifying lap times. Dovi said that the race was slower due to the excessive wear from the Michelin rubber.

“Most of the time, the race is slower, and nobody is able to push from the beginning to the end because the consumption of the tyre is always a bit high,” said Dovizioso.

“So that is the reason why we were a bit slower than the practice. Everybody was managing their energy but especially their rear tyre. I’m so happy, was a perfect weekend because to start with this speed in first practice was perfect and gave us the possibility to work in a perfect way for the race. We put a lot of laps on the tyres, we did a perfect qualifying and starting on front really helps you to manage the front tyre in the best way.”

With seven laps to go the front-runners decided it was time to go and Dovizioso found himself battling and swapping placed with his team-mate Jorge Lorenzo and Marc Marquez. The Italian said he had to change his plan every lap but was happy with how it played out.

“It was the perfect strategy, I decide the strategy lap-by-lap,” he said. “I was trying to understand the competitors.

“Valentino for the first half of the race, and at the end I was waiting for Marc because I could hear his engine in every brake and every time he open the throttle. So I thought he have some margin, but at the end Jorge come with a really good speed and we start battling, so it wasn’t easy because the last five laps the tyre drop I think for everybody.

“Unfortunately I couldn’t see the level of the competitors because I was leading and when you fight you don’t know the competitors strong or bad points. So it was very difficult for me to battle with them and I was trying to answer very quick and make my rhythm and it was a good strategy.”

“I think if you start every weekend you can see easy our bike is better than last year,” Dovizioso said.

“The point is victories is zero and in the championship is very bad. But in all these three races we were fighting for the podium so we lose a lot of points. But I think and I believe what we change this weekend will effect the second part of the championship.

“I was feeling better; I was able to play with the bike in a better way. I’m not happy 100%, I think still we have to manage the tyre a better way. But overall our bike is really good.”