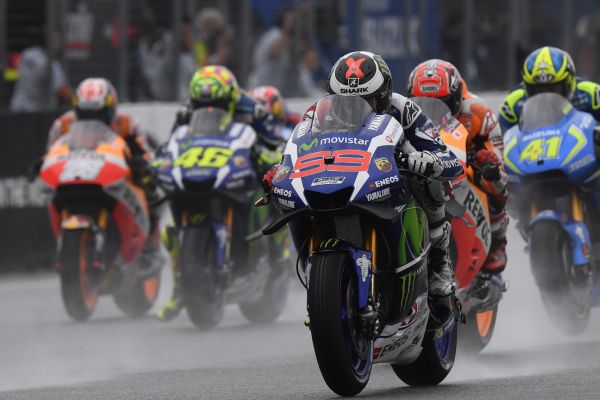 Jorge Lorenzo has said that he was feeling very strong, up until his front tyre tore apart, forcing him to pit twice in the space of four laps.

Lorenzo, much like Rossi and eventual race winner Cal Crutchlow, elected to run a harder rear tyre and as a result struggled in the early stages of the race. Dropping down to 16th, Lorenzo had to wait until the seventh lap before his rear tyre started to come to him.

Moving up to ninth position and following the progress of Crutchlow and Rossi, Lorenzo posted the fast lap of the race. He then had to pit due to unusual front tyre issues and due to MotoGP rules had to go out on a different set of tyres. After lapping two laps on slick tyres, Lorenzo came back into the pits, but by this point was down in 17th position.

Lorenzo was understandably very disappointed his race was decided by a poor front tyre, and not due to his own struggles in the rain.

“It’s a big pity because I was doing a great race, only I had some difficulties stopping the bike at the beginning when there was a little bit more water and especially with the hard tyre on the exit I didn’t have grip,” said the reigning MotoGP World Champion.

“I needed to be very careful and that is why I was quite far from the top. Little by little, as the track dried, the rear became better and I started to gain confidence, so seven laps before the end the front tyre tore up so I had to change bike twice and finished the race on the first bike in seventeenth.

“Rossi was unlucky in Mugello and I was very unlucky today, a lot of bad luck this season. We have to work, so this doesn’t happen more often, because we see it happen sometimes in the dry and today in the wet and we have to try not to have more tyre mishaps in the future.”