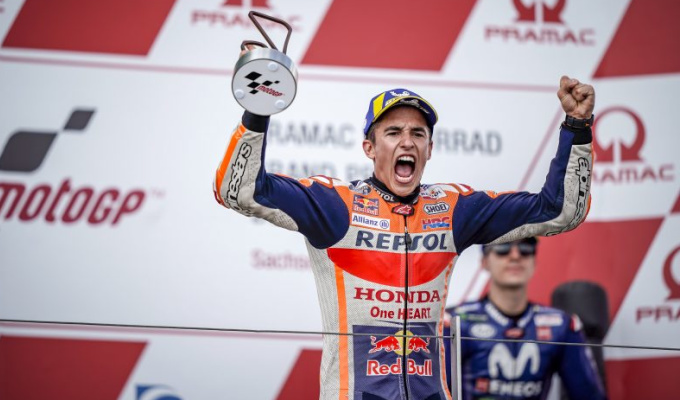 Marc Marquez has said that he had even more in the tank if needed, despite winning his ninth consecutive German MotoGP at the Sachsenring.

Starting from pole position, the World Champion was widely expected to make it nine in a row at the ‘Ring, however Marquez didn’t have it all his own way to begin. Finding himself behind Jorge Lorenzo and Danilo Petrucci in the early stages of the race, the Spaniard was made to work and wait to take the lead.

It wasn’t plain sailing once he had the lead either with Rossi keeping Marquez honest, however, with ten laps to go the race leader put the hammer down ending the race over two seconds ahead of Rossi. Despite putting in a run of quick laps to pull away from Rossi, Marquez rather ominously admitted he still had more to give.

“Everybody expected a big drop [from the rear tyres], but I already saw in the warm up and yesterday we improved a lot the set up,” said Marquez after the race.

“The drop was there, but it was consistent like in Assen. Honestly speaking at the end of the race I had even something more. I didn’t feel the drop this time in this race, I just tried to manage the distance between me and Valentino but I had something there but it wasn’t necessary to use.”

Marquez was patient in finding his way to the front of the race and not concerned with Lorenzo’s early pace, instead he was far more concerned with looking after his own tyres and ensuring he had enough to run his own race.

“Another victory here in Sachsenring , looks like every year is more and more difficult,” he said. “Especially this year was very difficult, because during all weekend good conditions so everybody can set up their bike and riding style in the correct way.

“But during the warm up I practice and I tried to find the feeling to save the tyres and see how was the lap time and when I was pushing to see which lap time I was able to do.

“So it was like this, I was just trying to save the rear tyre in the beginning of the race and then try to keep in the 21 high or 22 low but then I see that Valentino was coming quite fast and then I say okay now is time to use all the potential from the tyre, and then we will see at the end of the race.

But I did the fastest on lap 22 which is amazing because the tyre normally drops quite a lot but then when I opened two seconds I tried to manage but then I see that he drop quite a lot the pace. I’m happy to take 25 points and to go in the summer break with a good victory.”

Despite the early pace of Lorenzo his tyres didn’t last and the Spaniard ended up coming home in sixth position, just one place ahead of his team-mate Andrea Dovizioso who never found the pace of the leaders. Marquez admitted he expected the Ducati duo to be faster and closer to the front.

“The two guys I expect after practice were the two Ducatis. I saw Lorenzo was pushing a lot in the beginning but then I see in the middle he started to drop a lot then I say okay now it’s time to overtake,” said Marquez.

“It’s so difficult to overtake Ducati riders but I was able to overtake him and then just tired to keep pushing. The other guy was Dovi. In the race pace during warm up and in FP4 he was very, very fast, but looks like he dropped a lot of the pace in the race.”

Marquez had to look after his tyres, especially as he surprised many and elected to go with the soft rear tyre.

“I chose the soft rear option because all weekend I was working a lot for the race distance and on Friday I feel a little, but then on Saturday again. For some reason I feel softer the medium tyre than the soft. Its strange to say, but in some areas the harder tyre my feeling on the bike was softer than the soft tyre. So for that reason I chose that tyre because I was careful on the right side, but on the left side was much better,” said Marquez.