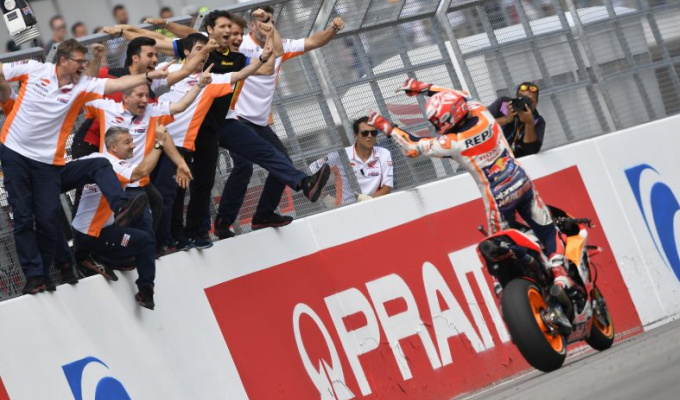 Marc Marquez extended his run of victories at the Sachsenring to nine after winning the German MotoGP from the Movistar factory Yamaha duo of Valetnino Rossi and Maverick Vinales.

Starting from the pole position, the World Champion found himself down in the third position behind the two Ducati’s of Jorge Lorenzo and Danilo Petrucci who both found got ahead of the Honda rider into turn one.

Once in the lead Marquez sat comfortably out front but when Valentino Rossi moved past Petrucci and then Lorenzo into second position, the Yamaha man closed the gap to just 0.6 seconds with still twelve laps to go.

With a message on his board that Rossi was closing, Marquez suddenly put the hammer down and within five laps he was two seconds ahead of the Italian. With Marquez edging away at the end of the race, Rossi settled for second position, ending 2.196 seconds behind the Marquez.

With the victory and Rossi’s second place finish, Marquez saw his lead atop the MotoGP World Championship build to 46 points.

Vinales’ path to third position saw him move past a quartet Ducati’s of Andrea Dovizioso, Alvaro Bautista, Jorge Lorenzo and Danilo Petruci to get back on the podium alongside his team mate.

Danilo Petrucci head the run of Ducati’s in fourth position with Bautista fifth, Lorenzo sixth and Dovizioso seventh. On a circuit, which is traditionally not a Ducati track, the Italian factory will be satisfied.

On the weekend he announced his retirement from MotoGP Dani Pedrosa was eighth with Johann Zarco and Bradley Smith rounding out the top ten on his KTM.

Hafizh Syahrin was eleventh on his Tech3 Yamaha and just ahead of Andrea Iannone who was caught up in an early crash, which saw Pol Espargaro, and Alex Rins crash out on the third corner of the race. Tito Rabat was thirteenth with Jack Miller and Scott Redding rounding out the point scorers in fifteenth.

Cal Crutchlow lost the front end of his LCR Honda going into turn twelve, crashing out of a potential podium challenge.