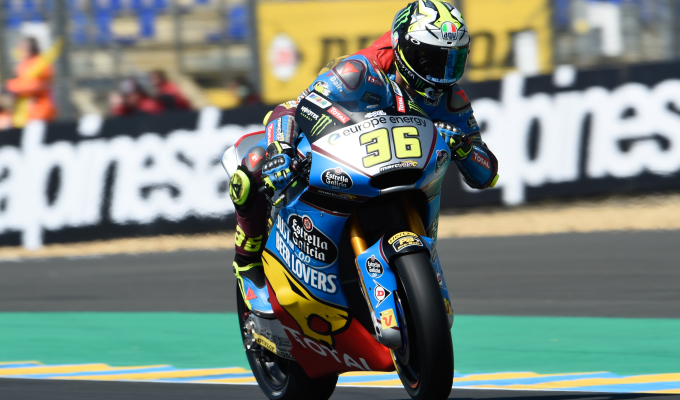 The Ecstar Factory Suzuki team have confirmed that Moto2 sensation Joan Mir has signed a two-year deal with the Japanese factory.

News of Mir’s imminent signing first emerged during the French Grand Prix last month and rumours were all but confirmed in Mugello before today’s official announcement.

The 20-year-old has enjoyed a rapid rise to the top. After dominating the 2017 Moto3 World Championship, the Spaniard moved to the Marc VDS Moto2 team for 2018. Impressing in the early stages has seen him earn a factory MotoGP seat.

Team Manager Davide Brivio suggested that the decision to once again bring a young rider into the paddock rather than a more experienced rider came from Suzuki management.

“Joan Mir is only 20 years old now, already a World Champion with an impressive 10 wins last year and he has already proven several skills. He is fierce, he is witty, he is nice and he can be very fast,” said Brivio.

“All the characteristics that we like to search for in a young rider, who wants to join us not only for the prestige of a factory machine in the top class but most of all because he believes in our racing project.

“Talking to him I realised how much he has a clear mind, how much he liked our Suzuki project and wanted to join us. This has been a great boost for us. Of course, we know very well that he will need time to gain experience and grow with us, but we have full confidence in his potential.

“Suzuki management encouraged us to pursue the ‘young rider philosophy’ and with Joan I think we found the perfect protagonist for this role. With Alex and Joan we have two very talented riders and our target is to create a strong Team for the future.”