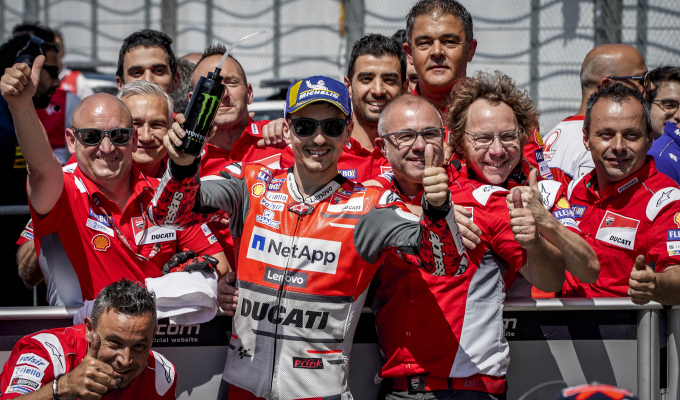 Jorge Lorenzo has agreed a two-year deal to join Marc Marquez in the Repsol Honda team according to reports.

According to Motorsport.com and Sky Spots Italy, the five-time World Champion has agreed a deal to partner Marc Marquez in the factory Honda team for the next two years, replacing the outgoing Dani Pedrosa.

The deal is said to be worth approximately €4 million per year and was said to have been agreed in principal prior to the Spaniard’s first win of the season in Mugello this past Sunday.

With talk of Lorenzo’s potential move to Petronas backed satellite Yamaha, Honda stepped up their efforts to secure the Spaniard and are said to have agreed the deal this past weekend in Italy.

Honda confirmed this morning that Dani Pedrosa would be leaving the factory after an 18-year partnership and it appears Honda had an agreement with his replacement already lined up.

HRC had been keen originally on Tech3 Yamaha’s Johann Zarco, but the Frenchman decided to join KTM’s ambitious MotoGP project. After Zarco’s rejection, Honda turned their attention to Joan Mir but much like Zarco, Mir felt his future lied elsewhere and the Spaniard has agreed to join Suzuki with an official announcement expected prior to next weekends race in Barcelona.