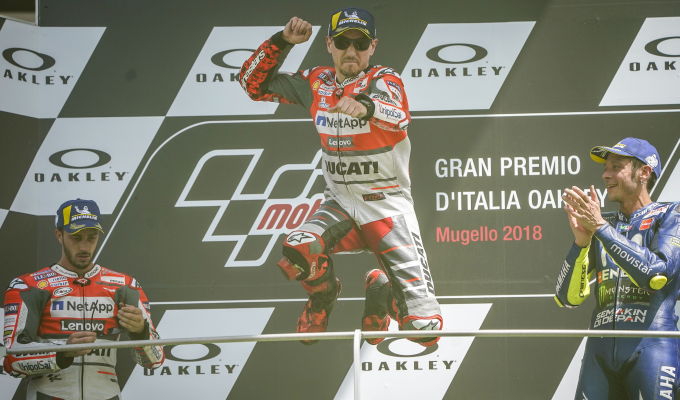 Jorge Lorenzo ended his tough 18-months without a race win by delivering a trademark Lorenzo win at Mugello, as World Championship leader Marc Marquez crashes out.

The win marks the first time that Lorenzo has tasted victory since his high profile move from Yamaha to Ducati at the beginning for 2017 and gives the Spaniard his first victory since Valencia 2016.

Starting from second place Lorenzo took the wholeshot and left the rest of the MotoGP field behind going on to take victory from his teammate Andrea Dovizioso and pole sitter and local legend Valentino Rossi, who came out on top of a four man battle for the final podium spot.

Marc Marquez was in the centre of the drama, after causing contact with Danilo Petrucci in the second corner, Marquez lost the front end of his Honda RC213V and despite rejoining failed to score any points finishing in sixteenth place.