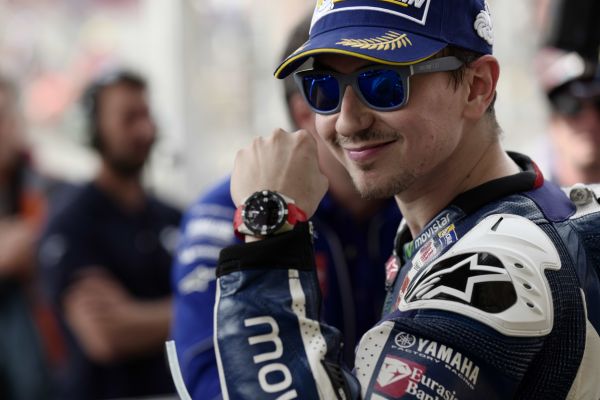 Jorge Lorenzo converted his lap record pole position into a dominant victory, finishing ahead of Valentino Rossi and Maverick Viñales, taking the World Championship lead in the process.

Lorenzo displayed a typically dominant afternoon, taking the lead off the start and never looking back at chaos that ensued behind him.

Valentino Rossi managed to salvage second position from his third row start, whilst Maverick Viñales claimed his first ever MotoGP podium, even if it was aided by crashes from potential podium finishers.

Andrea Iannone was the first to fall at Garage Vert. After moving ahead of his teammate, Iannone looked the only man capable of challenging Lorenzo for the victory, however the Italian lost the front end of his GP16 for yet another DNF, with his future up in the air.

A tough weekend for Iannone… https://t.co/WDNnAupSfY

Nothing on the track but a very strange crash for both Dovi and Marquez https://t.co/pCxE31xF6U

Maverick Viñales managed to convert his strong start to the season to his first ever MotoGP podium after doing the hard work getting ahead of his team-mate, Dani Pedrosa and Pol Espargaro in the early laps of the race.

Dani Pedrosa converted his fourth row start to a solid fourth place as the top Honda, whilst Pol Espargaro won the family battle beating out his brother for fifth position.

Danilo Petrucci claimed a heroic seventh position with only one hand, holding off Hector Barbera on the final laps.

Alvaro Bautista and Stefan Bradl on the two Aprilia’s rounded out the top ten ahead of the Ducati’s of Eugene Laverty and Loris Baz, whilst a remounted Marc Marquez rounded out the thirteen finishers.

One thought on “Lorenzo smashes field in dominant French victory”