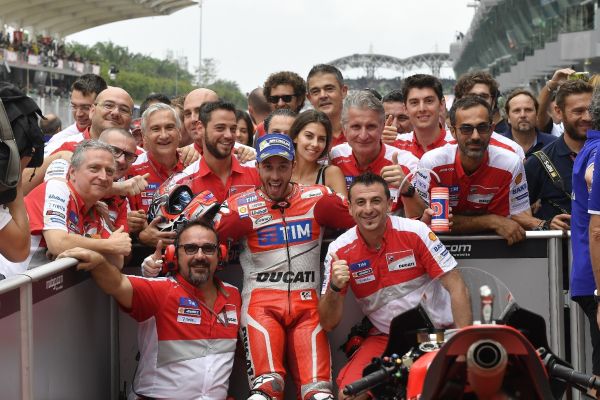 Andrea Dovizioso became the ninth different MotoGP winner of 2016 with a dramatic victory in Malaysia.

Starting from the pole position, Dovizioso was in a fight along with the factory Yamaha’s of Valentino Rossi, Jorge Lorenzo, the Honda’s of Marc Marquez and Cal Crutchlow and his team-mate Andrea Iannone during the early stages of the race. With six laps gone, the front five pulled away from Lorenzo.

The front five seemed to be bunching up heading into a busy final few laps when Cal Crutchlow lost the front end of his LCR RC213V Honda at turn two, only for Marquez to fall out of fourth position just nine corners later. One lap later at turn nine, Andrea Iannone crashed out of third and the five-way battle for the lead suddenly became a straight fight between the two Italians.

The decisive moment happened at the start of the 14th lap when then race leader Valentino Rossi ran wide going into turn one. With ‘the Doctor’ leaving the door wide open for the Ducati man, Dovizioso put the hammered down and broke the back of his compatriot with two very quick laps, building a buffer of three seconds up, only to cruise comfortably to his second career MotoGP victory, seven years after his debut win at Donington Park in 2009.

Valentino Rossi built on his lead in the chase for second place in the MotoGP World Championship standings, finishing ahead of his team-mate with the podium made up of the front row in the order they qualified.

Hector Barbera back on his Avintia Ducati beat his team-mate to fourth position with Baz in fifth. Maverick Viñales had a quiet race to come home in sixth position with Alvaro Bautista with another extremely impressive showing on the Aprilia to earn himself seventh position.