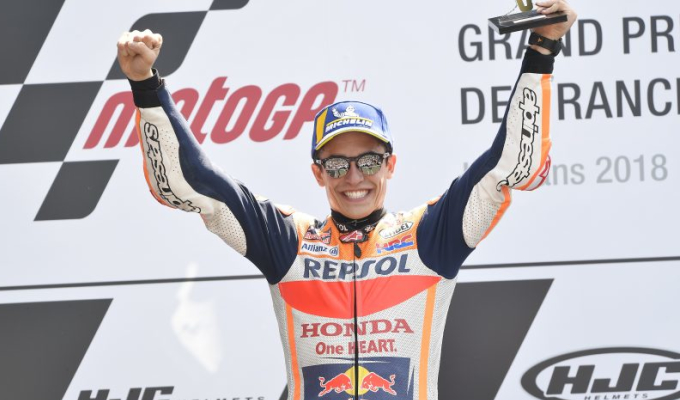 Marc Marquez extended his lead atop the MotoGP World Championship to 36 points after another faultless display around the Bugatti Circuit in Le Mans.

Starting the French Grand Prix from second on the grid, home favourite Johann Zarco was an early faller at turn eight along with Andrea Iannone and Championship rival Andrea Dovizioso both falling at La Chapelle. This marks two consecutive races where Dovizioso has crashed out, with the Italian seeing Marquez score 50 points to his zero over the last two weekends.

Marquez, who equalled Casey Stoner’s record of 38 MotoGP wins, controlled the race from the front and once Zarco and Dovizioso fell, the World Champion never looked in any danger of being caught by Danilo Petrucci who earned his first podium of 2018 and further strengthen his chances of landing the second factory Ducati seat for next year.

Valentino Rossi rounded out the podium with his first rostrum finish since Qatar and he will be hoping to build on this ahead of his home Grand Prix of Mugello in two weeks time.

Jack Miller pushed Rossi right until the end and continued his strong start to the season and looks to be getting on with his Pramac Ducati extremely well finishing ahead of the Repsol Honda of Dani Pedrosa and factory Ducati of Jorge Lorenzo with the Spaniard’s fifth and sixth respectively.

Maverick Viñales was seventh and found himself second in the World Championship behind Marquez despite only one podium so far this season. Cal Crutchlow came from his hospital bed to battle bravely through and finish eighth ahead of Aleix Espargaro and Alex Rins who rounded out the top ten.