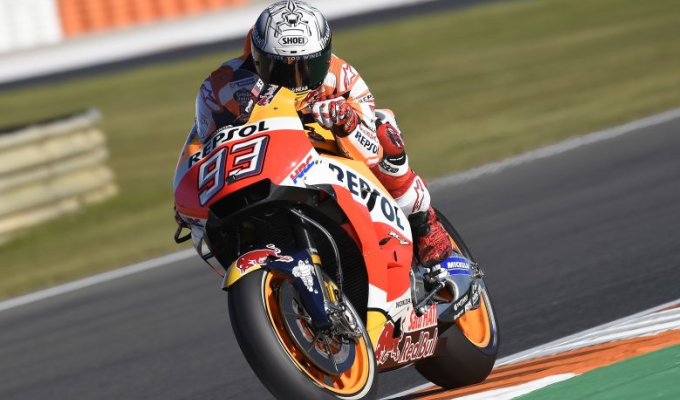 Marc Marquez laid down the gauntlet to Andrea Dovizioso on Saturday morning, topping the timing sheets by a quarter of a second from Johann Zarco.

The defending World Champion who ended the first day of free practice in fifth position and suffered a small crash in a less than optimal day. However, Marquez returned to regular action Saturday morning in typical fashion, topping FP3.

Johann Zarco was second fastest and he will be hoping to end the season as well as he started it and he was just ahead of Friday’s two session leads with FP1 fastest man Andrea Iannone – who had the exact sam fastest time as Zarco – ahead of FP2’s Jorge Lorenzo who was fourth.

Dani Pedrosa was fifth fastest and one of a few riders who didn’t improve on his lap-time from Friday, whilst Alex Rins continued to show development on his GSX-RR to finish sixth fastest and just two tenths off of second placed Zarco.

Michele Pirro was seventh fastest and just ahead of Dovizioso, who much like Pedrosa didn’t improve on his Friday time, but won’t have to worry with Q1. They will be joined by Jack Miller and Valentino Rossi who made it into the top ten by 0.061 seconds from Aleix Espargaro.

The second of the Movistar Yamaha riders Maverick Viñales couldn’t find the time that his team-mate did and Viñales will have to go through Q1 if he wants a shot at making it into the top twelve shootout.