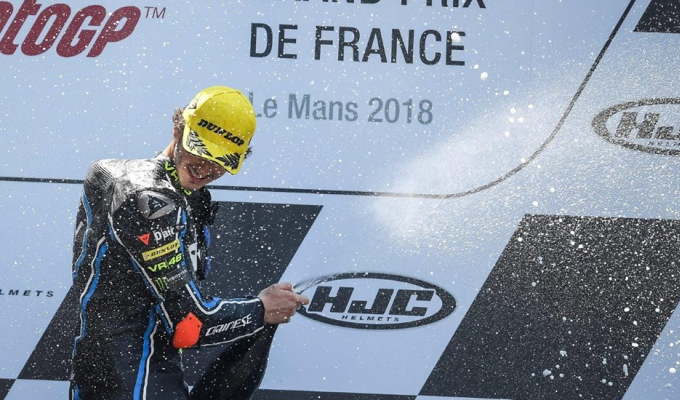 Pecco Bagnaia was masterful on his way to his third win of the season under the sun in Le Mans, becoming the first man to win from pole position around the French track since the inception of Moto2 in 2010.

Bagnaia was joined on the podium by Marc VDS duo Alex Marquez and maiden podium finisher Joan Mir who were second and third respectively.

Whilst Bagnaia had the perfect afternoon, the same cannot be said for second place starter Xavi Vierge when his Dynavolt bike had an issue on the grid, causing him to start from the back of the grid.

Bagnaia got the perfect launch and was never seen again from the rest of the field. Marquez tried his upmost to stay with the Italian and he did, however with four laps to go Bangaia’s dominance told and he ended up pulling away from the World Championship rival.

Mir came out on top in his battle with Marcel Schrotter to claim his maiden podium with the German finishing in fourth place, his best finish in Moto2. Despite starting from the back of the grid, Vierge managed to cut through the field and hold off a late challenge from Oliveira for fifth with the Portuguese finishing sixth.

Rookie Romano Fenati was seventh ahead of local rider Fabio Quartararo with Brad Binder and Stefano Manzi rounded out the top ten.

Championship challengers Mattia Pasini and Lorenzo Baldassarri both crashed out, although both Italian’s walked away from their crashes and will be ready to close the gap at the top to their compatriot.