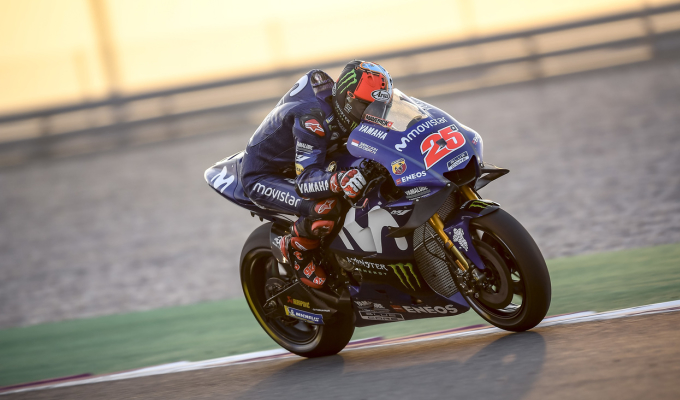 2017 race victor Maverick Viñales topped the timing sheets in the first evening of testing in the final MotoGP pre-season test in Qatar, with the top 16 riders covered by less than a second.

After struggling in Malaysia and Thailand, Viñales appeared to find some form in the first evening of testing topping the timing sheets with a 1″:55.053. Back at the circuit he won at in 2017, Viñales looked much more comfortable on track and after the struggles after his third win of 2017 in Le Mans and he will be hoping to reaffirm his testing pace tomorrow.

Second fastest was Andrea Dovizioso on his Ducati Desmosedici, a fraction over half a tenth of a second off the pace of Viñales. Running a bike with only a fraction of the aero winglets that other Ducati’s have, Dovi was just ahead compatriot and former team-mate Andrea Iannone on his Suzuki GSX-RR.

Johann Zarco was fourth fastest on his satellite Tech3 Yamaha and just 0.133 seconds off the pace of Viñales on the factory Yamaha and just ahead of Jorge Lorenzo and Alex Rins who ended the first evening fifth and sixth fastest respectively. Valentino Rossi was seventh whilst compatriot Danilo Petrucci was eighth with Cal Crutchlow and World Champion Marc Marquez rounded out the top ten.

The second day of testing continues Friday with many riders once again expected to wait until the second half of the testing session before venturing onto the track due to the conditions and not wanting to waste time on conditions so different to those that will be experienced during the race weekend.