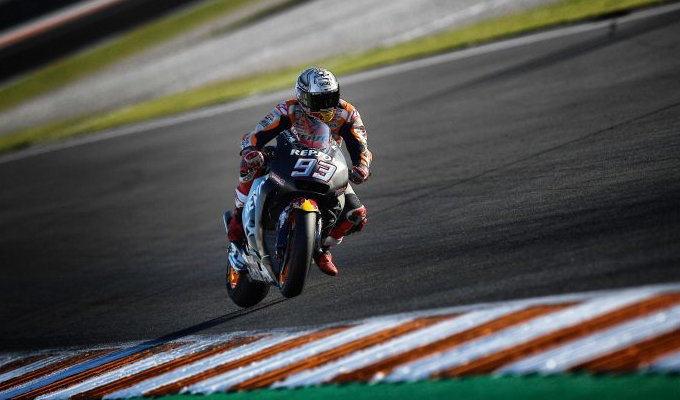 Marc Marquez leaves Valencia a six time World Champion and feeling confident about his 2018 chances after topping the post-race test by over four tenths of a second from his team-mate Dani Pedrosa and Johann Zarco.

Testing the 2018 RC213V as well as a modified 2017 version, the Repsol Honda riders, along with LCR’s Cal Crutchlow put over 170 laps in over the two days on both editions on next years bikes in a bid to make it easier to ride and more competitive.

Once again it was 2017 MotoGP Rookie of the Year and satellite Yamaha rider Johann Zarco who impressed as he was third fastest on the 2017 M1. Zarco had said he prefers the new bike that had been slammed by the factory riders saying it had more potential and helped him conserve energy.

Jorge Lorenzo was fourth fastest as he admitted he is still trying to modify his riding style in a bid to maximise the potential of the Desmosedici. The Spaniard got through 39 laps on a shortened second day.

Day One’s fastest man Maverick Viñales was fifth fastest. The Spaniard said that the first day was more positive for him – and not just in terms of times – although drew positives from his 66 laps today, stating that the different conditions helped him compare new parts tested.

Cal Crutchlow was sixth and just ahead of the second factory Yamaha of Valentino Rossi who spent the majority of the day working with the 2018 Yamaha M1 engine. Jack Miller was eighth and strong once again on the Pramac Ducati, this is despite a small crash early in the day with track conditions still very cold.

Andrea Iannone was back in action after being forced to miss Tuesday with a stomach virus and he was ninth fastest whilst Aprilia’s Aleix Espargaro ended the day tenth.

2017 MotoGP World Championship runner up Andrea Dovizioso was fifteenth after completing his testing programme early. Despite the unfamiliar finish, Dovi admitted he was happy with the work completed after two days.

Franco Morbidelli was the fastest rookie in 16th and despite a small crash was 0.081 seconds ahead of fellow rookie Taka Nakagami who also suffered his first fall on a MotoGP bike.

With the official test completed, some teams will be heading down to Jerez, whilst others will venture further overseas to complete the final bits of testing in 2017. Marquez confirmed that Honda are now done and he will begin his off season as of Thursday.