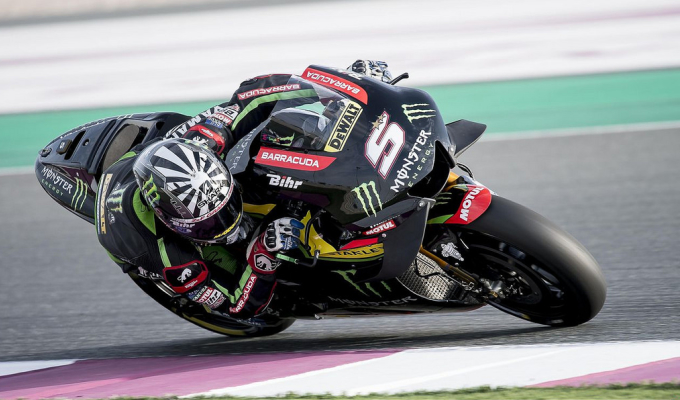 Johann Zarco headed Valentino Rossi on the final evening of MotoGP testing in Qatar, with the Frenchman just a tenth of a second off of the lap record in Losail.

The satellite Yamaha rider jumped to the top of the timing sheets with two hours left on the clock and improved his time a further two times with a best lap of 1:54.029 leaving him fastest by four tenths of a second.

After an early crash Valentino Rossi recovered to post the second fastest lap just under a quarter of a second off of Zarco’s time. Ducati’s Andrea Dovizioso was third, just half a tenth off of his compatriots time with Cal Crutchlow top Honda in fourth.

The leader on the first night Maverick Viñales was fifth fastest by the end of the session whilst World Champion Marc Marquez was sixth fastest.

Alex Rins, the sole Suzuki on Saturday evening with his team-mate nursing a stomach bug, was seventh fastest just ahead of the Ducati trio of Danilo Petrucci, Jorge Lorenzo and Jack Miller who rounded out the top ten.

Dani Pedrosa was eleventh fastest and just ahead of fellow Honda rider Franco Morbidelli who was the top rookie on the evening, just ahead of Tech3 rookie Hafizh Syahrin who was an extremely impressive 1.2 seconds off his team-mates fastest time on just his sixth day on the M1.

Tonight concludes the MotoGP pre-season testing programme for 2018 and the next time the riders will be on their bikes will be for the first free-practice session of the MotoGP season in Qatar.