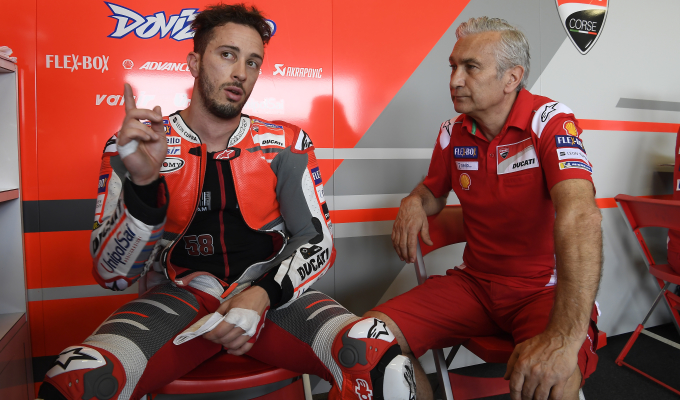 Runner-up in the 2017 MotoGP Andrea Dovizioso has said that World Champion Marc Marquez is not unbeatable as he prepares for the 2018 season on what he called the best Ducati ever.

On the back of his best ever MotoGP season, the Italian spoke to Moto.it about Marc Marquez,  Yamaha’s struggles, and the 2018 Ducati Desmosedici among other things after the test in Thailand.

The Italian ended up finishing 37 points behind Marquez in the 2017 season, however it was a lot closer than the end results may have suggested. Had results gone the way of the Italian in the final race of the season in Spain, Dovizioso could’ve been celebrating his maiden MotoGP title.

However, results went the way of the Spaniard and saw the now 25-year-old claim his fourth MotoGP title in just his fifth season. Despite the impressive results since moving into the premier class of motorcycle racing, Dovizioso said that Marquez isn’t unbeatable.

“He is very strong, at his age to have already won all these World Championships, what he has managed to do, to raise the level, avoid falls, he has characteristics that nobody else has,” said Dovizioso.

“There are no illusions. Whoever interprets it differently is a little ignorant about it. But that’s not to say that he is unbeatable, no person in the world is.”

After four races last season it wasn’t Marquez who was looking like the man to beat in 2017, but his compatriot Maverick Viñales on the Movistar Yamaha. After five rounds in 2017 Viñales had three wins under his belt and the Yamaha looked like the bike to be on with both Valentino Rossi and Johann Zarco also enjoying strong results.

However, it’s all gone downhill since with Rossi’s victory in Assen the only other Yamaha victory last year. With pre-season testing not going as well as last year did, many, including Dovizioso believe Yamaha have some serious underlying issues.

“From the outside, we don’t understood at all, but, surely, somethings not right,” he said. “When they have these ups and downs, it’s confirmation that they’re not calm, they don’t have the situation under one hundred percent control.

“It’s strange because Zarco is real. It happened to me too, the work is different when you’re in an official team or on a satellite. In the official team, you have to work to understand what you are testing, you have to use the tyres to do the tests, not the time. In a satellite team it totally changes.”

With regards to his own pre-season, Dovizioso has been steady if not spectacular. A man who often flies under the radar, the Italian ended the first test in Malaysia fourth fastest and the second in Thailand in seventh. After the second test Dovi said that the 2018 Desmosedici is the best Ducati he’s ever ridden, although said it’s still far from perfect.

“Yes, I said it, but I interpreted in a different way. If the question was: ‘Is it the best Ducati you’ve tried?’ I would say yes, but that doesn’t mean that having the best Ducat. I’m not saying, everything is fine or that it’s the best bike on the track,” he clarified.

“There is a difference, we created a good base last year, we won six races and we competed for the World Championship. With what the base is, we have our characteristics, with successes and shortcomings, but we still lack some aspects. The new bike is a little better at the start, better than last years, so with that in mind, this is the best Ducati I’ve tried.”