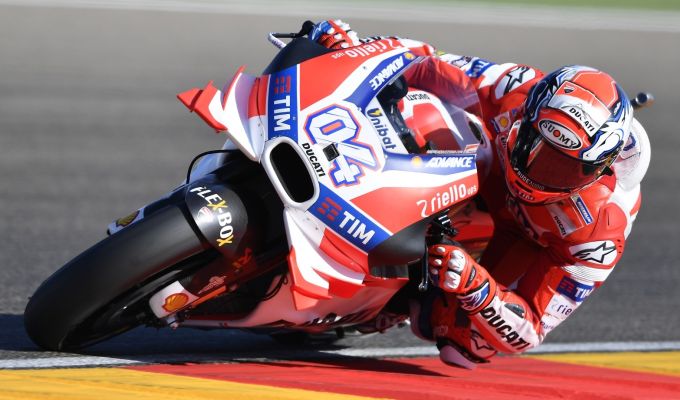 Andrea Dovizioso said that having a new teammate in the factory Ducati team will reinvigorate the entire team, whilst also accusing his former teammate of a lack of respect.

The Italian arrived at Ducati to replace Valentino Rossi in 2012 and he will now partner another former Yamaha star in Jorge Lorenzo. The Spaniard signed with Ducati at the beginning of May and then a battle ensued between Dovizioso and Andrea Iannone for the right to remain at Ducati and partner Lorenzo.

Dovizioso won the battle and subsequently kept his job, whilst Iannone signed for the factory Suzuki team. Dovizioso said he beleives this move with be good for the whole of Ducati.

“From the mid-season something clicked, which allowed me to finish the season in a positive way after a middle part when things were not going so well,” Dovizioso told Italian website Gazzetta dello Sport.

“Then, the change of teammate will be positive for everyone. We finished the season close to the best and this should encourage us to think big.”

Iannone will leave Ducati after two seasons in the factory team alongside Dovizioso, after an amicable first season, tensions were much higher between the two this year. A hot point in the relationship was in the second race of the season in Argentina, where Iannone took Dovizioso out of the race at the final corner of the race, when the pair were in podium positions.

Despite admitting that Iannone inspired and challenged him, Dovizioso said he wouldn’t miss having Iannone as a teammate at Ducati, in part due to a lack of respect shown by Iannone and his personal team.

“No [I won’t miss him]. One on the hand, he served as a stimulus for me, since he is a very fast rider and I liked having him as a teammate. But the attitude of Andrea and his entourage… for me, respect for people is important, and his entourage, and especially him, do not have it,” he said.

Despite looking forward to Lorenzo joining him, Dovi admitted he hasn’t spoken to Lorenzo since the Spaniard’s first test on the Ducati.

“We talked before the first test in Valencia, but after, I haven’t had a chance,” he said.