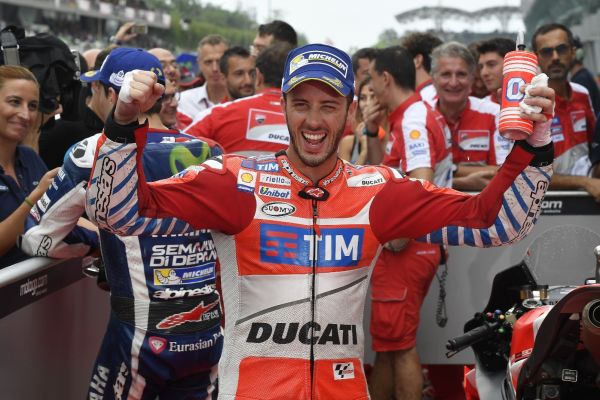 Malaysian Grand Prix pole sitter Andrea Dovizioso said that he beleives he could have gone even faster around the Sepang International circuit during qualifying.

The Italian the only rider who decided to run on a wet rear tyre, a move that saw him set the fastest time from the off. After the first set of runs, Dovizioso found himself fastest with a lap time of a 2:11.511 before pitting and switching onto a harder rear tyre.

Whilst the pace wasn’t blistering after the switch, Dovizioso did improve on his lap time, knocking another two hundredths of a second off of his time to cement his pole position ahead of the two factory Yamaha’s of Valentino Rossi and Jorge Lorenzo.

“It was a really strange qualifying session, I reckon I was the only one to fit a soft rear tyre on the first run, and I wasn’t sure that I had made the right choice,” said the Italian who is four points behind Cal Crutchlow in the overall standings.

“Instead our strategy worked well because we were able to immediately set the best time, on my first lap, without even pushing that hard. Then I stopped to try the hard tyre and I didn’t think I could improve.

“Instead I managed to do so and I am really happy because I even think that with an extra lap I could have gone even faster.”