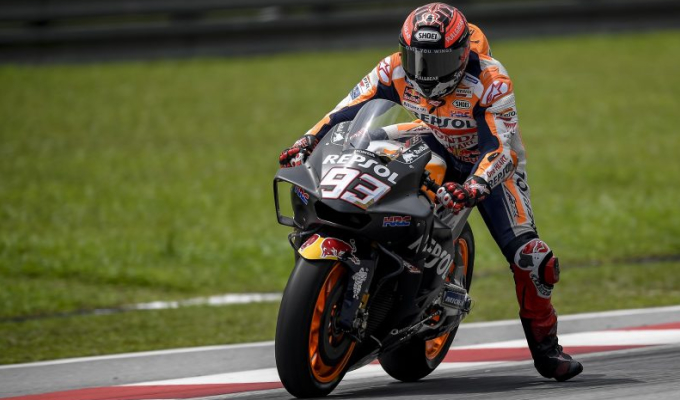 Marc Marquez has extended his Honda contract to go through to 2020, upping his stay in the Honda factory to a minimum of eight years.

The World Champion is the latest name to sort his future before the start of the 2018, ensuring no distractions as he attempted to win his fifth MotoGP World Championship.

Marquez, who has won four of the last five MotoGP titles said that he was excited and proud to continue his career with Honda.

“I’m excited to continue to race for Honda’s factory team in the MotoGP class,” said the 25-year-old.

“I’m proud to race as a member of the Honda family, and I appreciate how Honda and the team always do their best to provide me with everything I need.

“I would also like to thank everyone who has given me such warm support over the years. The first two official tests went well and, with my contract renewed, I can focus on racing in the new season.

“I will continue to enjoy racing, share my joy with everybody and do my best to reach our shared goals. Thank you!”

HRC President Yoshishige Nomura said the deal was easy to get done before the season due to both parties happiness with the way things are going.

“I am very pleased that Marc Marquez will continue to ride for our factory team,” he added. “Marquez has consistently pushed himself to the limit and matured as a rider, and given Honda many titles.

“We were able to announce the contract renewal at such an early stage due to our mutual trust, and our common passion for racing.

“I am certain that we can provide an environment for him to concentrate on the final tests in Qatar this week and in the lead-up to the opening round, and that we can start the 2018 season strongly.

“HRC will continue its challenge with Marquez, a vital rider in the future of MotoGP. I appreciate and look forward to everyone’s continued support for the Repsol Honda Team.”

With the 2018 season not even underway yet, Marquez joins Yamaha’s Maverick Vinales and Pramac Ducati’s Pecco Bagnaia as signing deals in the last couple of weeks for 2019 and beyond.

Whilst unofficial, Honda are also expected to extend the contract of Dani Pedrosa who has been with the Japanese manufacturer since his debut MotoGP season in 2006.