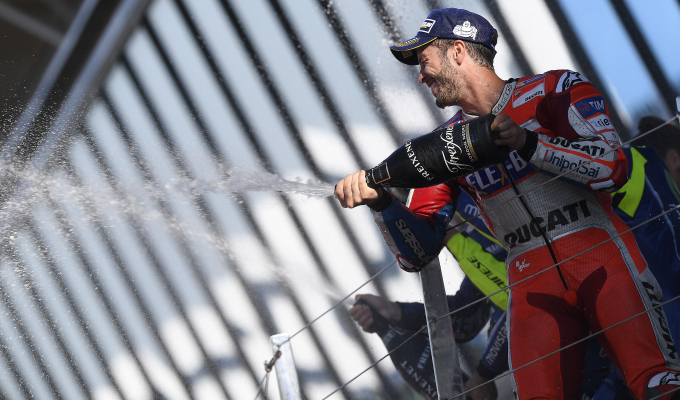 Andrea Dovizioso said that despite winning his fourth Grand Prix of the season, he wasn’t faster than his rivals today, he was just in the right place at the right moment.

The Italian managed his race perfectly, going past Rossi with three laps to go and coupled with Marquez’ engine issues, the experienced Italian now finds himself with a nine point lead with just six rounds remaining in 2017.

“I’m a bit surprised because for the race I had a good feeling, but not to be able to win,” said Dovi

“I expected Honda to be very competitive but it didn’t happen. During the race we have to ride in a bit of a different way to practice and that changed most of the race. I was very comfortable in the race and I was able to save the tyre like I saw Maverick and Marc as I was with them and did similar things, and that helped me arrive at the end with better grip.

Despite leading the World Championship and being in a serious title fight for the first time in his MotoGP career, Dovizioso said that whilst he understands the fight he is now in, he is not thinking about the championship.

“What happened today is something special for us. We’re leading, but we’ve showed to everyone we have a chance to fight for the Championship. It’s long and the competitors are very strong, riders and bikes, so I think it will be open, one hundred percent,” he said.

“But we’ve won four races in a different way which means we have a good base and we work very well during the weekend. When we’re not fastest we’ve stayed calm and continued to work, we go to a race with a good feeling and try to do the maximum.

“I am convinced that down to Dani is completely open. Every race can change everything, look at Marc. Over the last few races he created a gap and looks like the fastest, then today he has some bad luck. But this is something that can happen.

“But we speak to much about the championship, but I still don’t feel like it’s the right time. Everybody has to push one hundred percent to try and get the maximum because the difference in the championship is very close. Six races is a lot of points and we have to think race by race.”

Ducati have spent a lot of money and used a lot of resource in trying to turn to Desmosedici from a bike that only one man has truly mastered in Casey Stoner, to one that anyone could ride. With four wins in the last seven races, have Ducati now got the most balanced bike on the grid?

“It’s difficult to say the Ducati isn’t the most balanced bike at the moment. Because since Italy our balance has been really good. Also when we didn’t make the podium in Assen we were the fastest in the race before it started to rain. So it looks like with the tyres we have this year we have really good balance,” said Dovi.

Dovizioso said that he enjoyed today’s race, without thinking about the championship, but said that he couldn’t really read his pit board with the home straight so short. With difficulty reading his pit board, Dovi didn’t realise that Viñales and Crutchlow were so close behind until the end of the race.

“I wasn’t thinking about the Championship, I was comfortable in the race and when you’re comfortable you can play. It was fun to manage the tyres and was fun to ride with Marc, Cal, Maverick and Rossi, it was really nice to battle with them in a good way,” said Dovi.

“It was difficult to understand what happened in the race. Because the main straight is very short it’s hard to see the pit board. I saw Marc out one lap, but for example for the three laps, I didn’t know it was four riders. I thought I was alone with Valentino. I didn’t understand after when I saw plus 2 on the pit board I didn’t change my strategy because I felt comfortable.

“I saw Valentino drop a little bit, I saw him struggling with the rear tyre so I thought I had to take the opportunity, I have to fight and we will see the last three laps. But in the end I saw Maverick come back and I pushed one hundred percent. It was very close but in the end I was able to manage.”