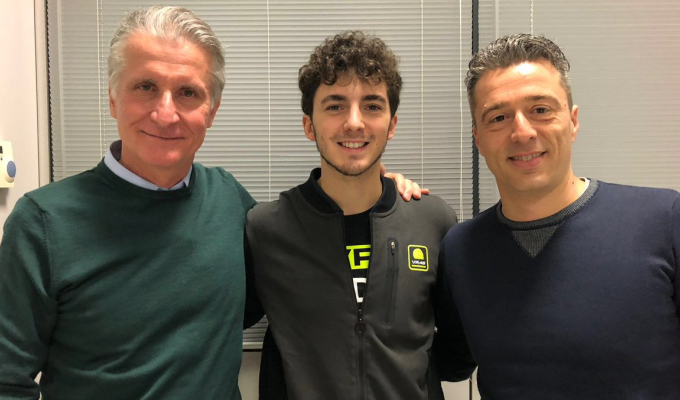 Italian Francesco ‘Pecco’ Bagnaia has signed a two-year deal as part of the Pramac Ducati team for 2019 and 2020.

The 21-year-old who is expected to be a title challenger in the Moto2 class as part of the Sky VR46 team in 2018 said that he will remain focused on his task this year, although signing a MotoGP deal is a dream come true.

“Next year I my dreams will come true. I have often said that I would have like to debut in MotoGP riding a Ducati and it will finally happen.” said the Italian.

“For me it is a great result and I have to thank the Team, Sky and the VR46 Riders Academy, for all the support and for following me in my growth path in the last five seasons, three with the Sky Racing Team VR46.

“But now, it is important to stay focused on this last season in Moto2. We have a great opportunity.”

Bagnaia will replace Danilo Petrucci who has confirmed that he will be leaving the Pramac team at the end of the 2018 season in the hopes of securing a factory ride and is beleives to be on both Suzuki and Aprilia’s radars for 2019, with Ducati set to renew both Lorenzo and Dovizioso’s contracts.

Although his first official test as a MotoGP rider will come in November, Bagnaia got a taste of the Ducati Desmosedici when the Aspar team rewarded him for his Moto3 efforts in 2016 with a few laps during the post-season test at the Ricardo Tormo circuit.

Bagnaia is also the first rider of part of the VR46 rider academy to work their way from Moto3 to MotoGP, joining fellow member Franco Morbidelli who will make his debut in 2018 with the Marc VDS Honda team.