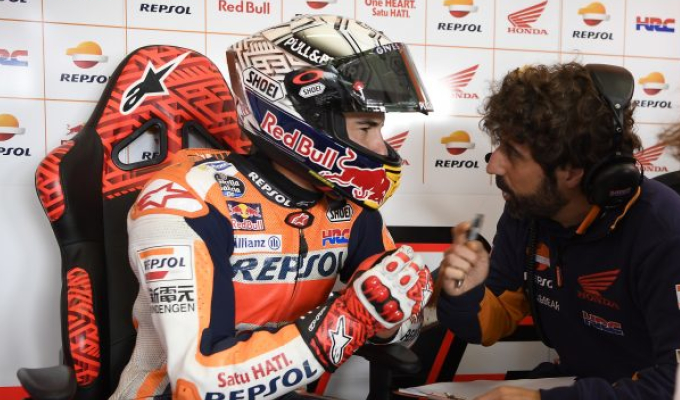 Marc Marquez’ successful crew chief Santi Hernandez, has said the he believes that Marquez has “the ambition to win a World Championship with another bike.”

Marquez won his sixth World Championship at the weekend and his fifth with a Honda engine. His first World Championship back in 2010 was won on a Derbi, but since making the move to Moto2 and then into MotoGP, all of Marquez’ title have been Honda powered.

Long before making the move to MotoGP, the Spaniard’s path seemed clear. Upon moving into Moto2 in 2011, petroleum giant and title sponsor of the Honda MotoGP team Repsol, signed to become a sponsor of Marquez’ Moto2 team. Once the MotoGP rookie rule was removed in 2012 for 2013 and with Casey Stoner’s retirement, Marquez was heading to the factory Honda team.

Four MotoGP titles in five years later, Marquez and Honda’s relationship seems stronger than ever. With no Rossi-esque, or even Stoner-esque split on the horizon, it looks as if Marquez could stay with Honda for the remainder of his MotoGP career, however many years that is.

However, the allure of winning a MotoGP World Championships on another bike has always appealed to motorcycle racers. Whether it’s an ego thing to prove it’s their own talent and not the bike or if it’s to cement their name amongst the greats, the desire has always been there, and it appears Marc Marquez is no different. Could a victory on another bike leave Marquez regarded as the greatest ever on two wheels?

Not many men know Marquez better than his crew chief Santi Hernandez. The Spaniard has been working with Marquez since his first season in Moto2 back in 2011 and has seen the World Champion grow up before his eyes.

Speaking with Motorsport.com, Hernandez left the door open for a potential parting of ways from Honda in the future.

“Marc has the talent, the strength and the ambition to win a World Championship with another bike,” said Hernandez.

“If I were any manufacturer, I would want Marc in my team, I would want him to do to my bike what he does with the Honda. He’s hardworking, ambitious, kind, and always gives everything. He is the rider that any brand would want.”

Many speculate that if Marquez was to leave Honda it would be for KTM. KTM are the obvious link for the 24-year-old. The Austrian brand is heavily backed by Marquez’ personal sponsor Red Bull. Despite the link, KTM have distanced themselves from Marquez in recent days, citing a lack of credit the bike would receive as a main reason for not clamouring for the signature of the World Champion.

3 thoughts on “Santi Hernandez: Marc has the ambition to win a World Championship with another bike”