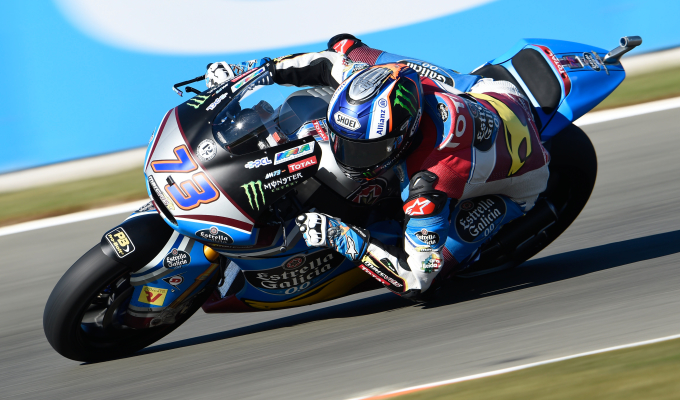 Estrella Galicia 0,0 Marc VDS Moto2 rider Alex Marquez will get his second taste of a MotoGP bike when he will test the Marc VDS Honda RC213V in Jerez next week.

Younger brother of now six-time World Champion Marc Marquez, Alex was rumored to have been offered the chance to ascend into the Marc VDS MotoGP team alongside Morbidelli in 2018. Marquez is said to have declined the opportunity, wanting one more crack at the Moto2 World Championship with the Marc VDS team before moving up.

With Marquez deciding to stay in Moto2, the satellite outfit elected to sign 2017 Moto2 runner up Tom Lüthi to partner with the Moto2 World Champion, going down the route the Tech3 Yamaha team employed this year of two rookies. However, with Lüthi currently sidelined until Sepang next year after breaking his ankle in Malaysia a little over two weeks ago, Marquez will fill in and get his share of laps around Jerez.

“We will make one and a half day next week in Jerez, because of Tom’s injury,” Bartholemy told MotoGP.com. “We had also the problem that the team is actually new, we have a new crew chief, we have a new mapping person, new mechanics.

“And I don’t want to go to Sepang test with a rider that was never on a MotoGP bike and a team that has absolutely no idea about the MotoGP bike, the tyres, the set-ups.”

Marquez – who won his maiden Moto2 race in Jerez earlier this year, before going on to win two more races in 2017 – isn’t a stranger to a MotoGP bike. The 2014 Moto3 World Champion was given the chance to do some parade laps on his older brothers RC213V alongside Marc as a gift from Honda as the pair of them both won their respective World Championships.