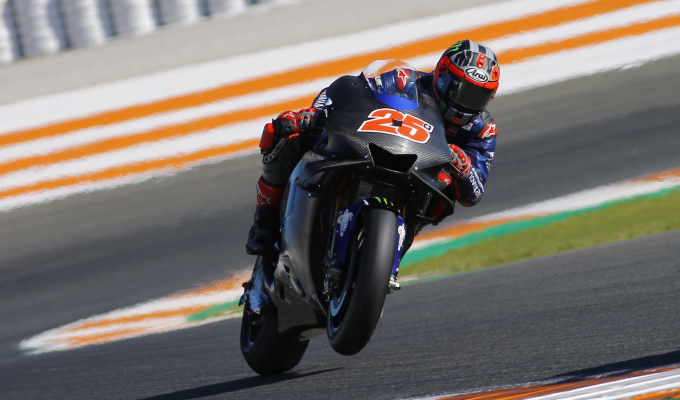 The factory Yamaha team of Maverick Viñales and Valentino Rossi were once again using predominantly 2016 bikes – similar to those used during Sunday’s race – to set their fastest times, whilst Tech3’s Frenchman Johann Zarco was using the 2017 M1 that caused the factory riders so much trouble over the season.

Viñales’ managed to post his fastest lap on the 70th of his 80 laps from the day and was less than a tenth off of his qualifying time from the weekend.

Valentino Rossi was fourth, but not after a spectacular looking crash at turn four, totally destroying his M1, although fortunately he walked away unharmed from the crash. Unfortunately for him, he managed to damage his version of the 2018.

Jack Miller on his first ever run on the Ducati was an impressive fifth fastest on the Pramac machine, with the Australian lapping over half a second faster than he managed at any point over the weekend on the Marc VDS Honda.

Aleix Espargaro was sixth fastest and just ahead of the factory Ducati pair of Andrea Dovizioso and Jorge Lorenzo. KTM’s Pol Espargaro was ninth fastest whilst Cal Crutchlow on the 2018 RC213V rounded out the top ten.

LCR Honda’s Taka Nakagami was the fastest rookie of the first day, ending in seventeenth position, just one position and 0.039 seconds ahead of 2017 Moto2 World Champion who continued to get faster and faster as the day progressed. Xavier Simeon was 20th on his MotoGP debut and last of the rookies with Tom Lüthi sidelined from his ankle injury.

Factory Suzuki duo Alex Rins and Andrea Iannone were both sidelined today due to a stomach virus whilst a nasty highside forced Alvaro Bautista to take a trip to the local hospital and was lucky to avoid any serious injuries.