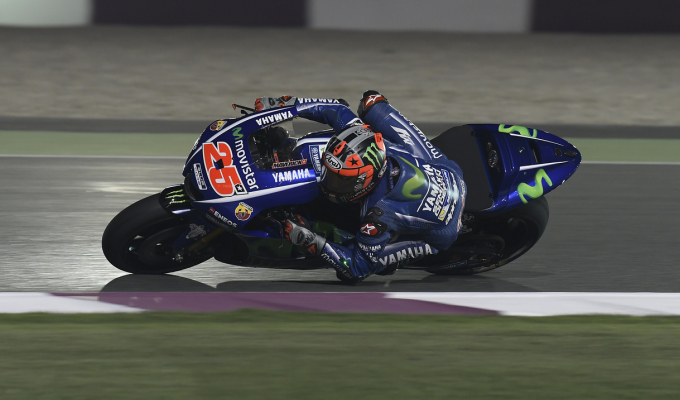 Maverick Viñales completed a clean sweep of pre-season testing, ending the final evening of testing with the fastest time overall, the perfect preparation for the 2017 season.

After dominating the opening two tests of the winter, the Spaniard laid down his final marker to the rest of the field with another lap record of 1:54.330 which was 0.071 seconds ahead of second placed Andrea Dovizioso. The Ducati historically goes well in Qatar and after further experiments with the new highly discussed fairing, the Italian ended less than a tenth behind his 22-year-old.

Dani Pedrosa was third fastest and the top Honda after posting a fast lap in the final hour which will encourage the Spaniard after some difficult tests through February and March ahead of the season.

Last night Jorge Lorenzo said that it was hard to judge the evening as he hadn’t used a super soft tyre to try and post a single quick lap. After this evening, he will have a much better idea and will be happy with what he’s found. The five-time World Champion was fourth fastest overall and ended less than two tenths behind Viñales’ best time.

Alvaro Bautista and Scott Redding made it four Ducati’s in the top six with their Aspar and Pramac Ducati’s respectively, both lapping within half a second of the fastest time of the day. Jonas Folger was the second Yamaha on the evening and continued to impress in seventh position.

Cal Crutchlow was eighth fastest whilst Johann Zarco and Marc Marquez rounded out the top ten. Marquez had an eventful evening which saw him debut a new fairing for the RC213V, but also saw him fall three times on the night.

Valentino Rossi was eleventh fastest on the evening and despite feeling confident after the second night, but will be a little more concerned after the pace he found seemed to desert him. Despite his lack of pace on the final evening, Rossi’s time from Saturday night was good enough to leave him sixth overall in the test.

The KTM trio of Bradley Smith, Pol Espargaro and Mika Kallio rounded out the field.

The field will now have two weeks off before the season begins in Qatar under the floodlights with Viñales now the favourite to challenge Marc Marquez for the 2017 crown.