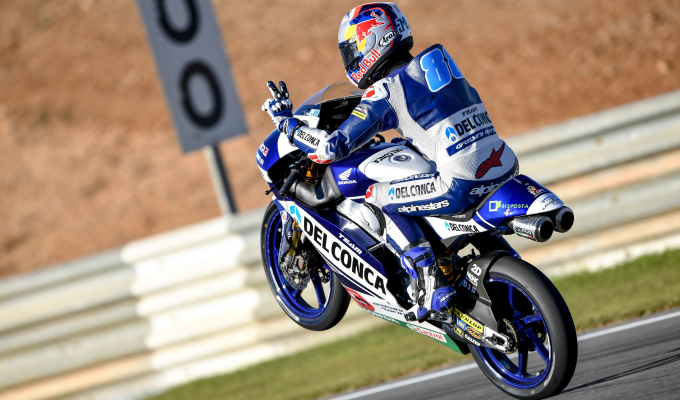 Jorge Martin finally claimed his maiden Moto3 victory under the Spanish sunshine in the final race of the 2017 season in Valencia.

After dominating all weekend, Martin was hoping he would be able to finally convert one of his pole positions into a victory and he finally managed that around the Ricardo Tormo Circuit in Valencia.

His life was made easier when on the fifth lap of the race, second placed Gabi Rodrigo high sided at the slow turn eighth, forcing third placed Joan Mir to take action to avoid the stricken bike. Aided by the crash, Martin soon cleared off and was never touched or troubled again, winning the race with a long stand up wheelie over the line.

Behind Martin, 2017 World Champion Joan Mir showed just how good he’s been, recovering from the incident with Rodrigo which forced him down to nineteenth to claim yet another podium and finish in second place, just ahead of Marcos Ramirez.

Behind the podium, the experienced Italian duo of Romano Fenati and Enea Bastianini who finished fourth and fifth respectively after a battle to the line.

Juanfran Guevara was sixth place, moving up a spot after wild-card Dennis Foggia, after the 16-year-old was forced to drop a position due to exceeding track limits. John McPhee battled through the pain of an injured ankle to battle through for eighth place with Aron Canet and Kazuki Masaki rounding out the top ten.