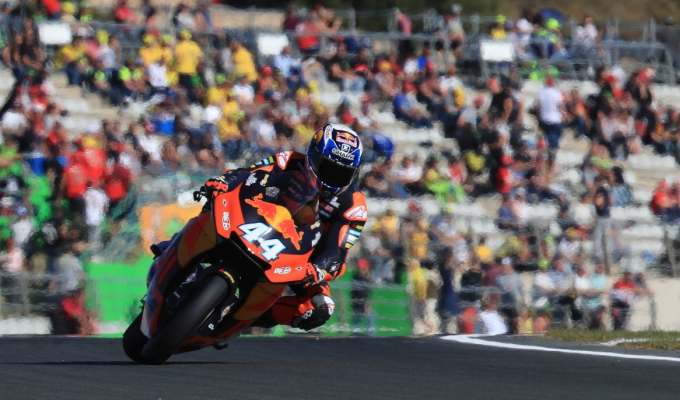 Miguel Oliveira oozed class as he edged his way to a third consecutive victory to end the Moto2 season, sending out an ominous message to the Moto2 field for 2018.

The Portuguese rider showed patience as the two Marc VDS riders broke away early and once the World Champion had cleared his team-mate, it looked as if he was going to pull away and walk to yet another Moto2 victory. However, once Oliveira passed Marquez for second place in the mid point of the race, the KTM set about closing down the two second gap to the Italian.

Working metronomically Oliveira closed and eventually passed Morbidelli with five laps to go before slowly pulling away and claiming his third win in a row.

Behind the front two was Brad Binder who himself claims his third podium in a row and after an injury ravaged rookie season, the South African will be happy with his progress and will be hoping to convert into bigger things next season.

Pecco Bagnaia ended a rookie season in fourth place just ahead of Alex Marquez and Hafizh Syharin. Taka Nakagami finished his final Moto2 race in seventh place before making his move into MotoGP next season. Fabio Quartararo was eighth fast whilst Corsi and Domi Aegerter rounded out the top ten in an emotional weekend for the Kiefer Racing Team.