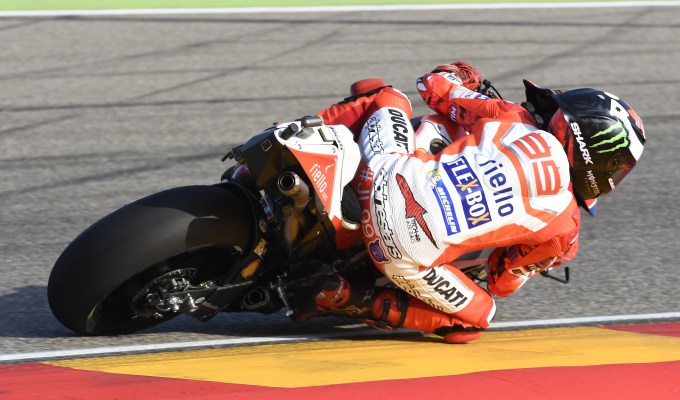 Jorge Lorenzo topped the timing sheets on the opening day of free practice in Valencia as defending World Champion Marc Marquez suffered a small crash in the final stages of FP2.

The Spaniard arrived in Valencia saying he would help his team-mate where possible, but if he cannot aid Dovizioso, he will be looking to continue his run of claiming a victory in every season he has been in MotoGP.

In the closing stages of FP2, Lorenzo fitted his Ducati with soft tyres front and rear and posted a 1:30.640 which was 0.122 seconds ahead of second placed Dani Pedrosa. Pedrosa who had led for the majority of the session sandwiched Dovizioso who himself on the soft rear tyre ended third position.

Spectacular rookie Johann Zarco continued his strong showing and ended the first day in fourth position, just ahead of FP1 leader Andrea Iannone. Reigning World Champion Marc Marquez was sixth fastest but also suffered a small crash at turn two, losing the front end of his Honda RC213V. Marquez walked away from the crash unharmed, but it’s a less than optimal start for the Spaniard.

The Yamaha duo of Valentino Rossi and Maverick Vinales will have to find something over night in a bid to jump into the top ten tomorrow morning to avoid having to take the awkward route of Q1 to have a shot at pole position tomorrow afternoon.