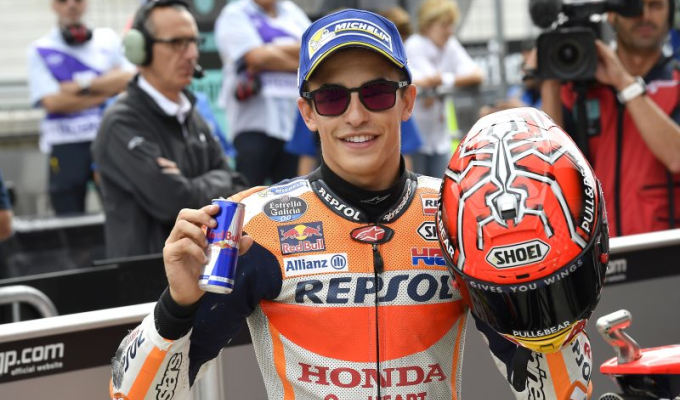 Marc Marquez produced the fastest ever two wheeled lap around Silverstone to claim pole position from Valentino Rossi and Cal Crutchlow in a sensational MotoGP qualifying session at Silverstone.

The Spaniard went under his lap record in the first run of laps and looked on course to go under the two minute barrier for the first time ever on his second lap of his first run, only to make a small mistake at the end of the lap.

However, after a new set of Michelin tyres, Marquez was back out and despite suffering a couple of typical Marquez scares, the World Champion produced the first sub two minute lap by a bike around Silverstone, a 1:59.941.

As Marquez crossed the line, Valentino Rossi was nearly four tenths under Marquez’ time heading into the final sector. Rossi had struggled in the final sector earlier in the day, and his struggles proved to be pivotal in the end as he ended just 0.084 behind Marquez’ time.

Cal Crutchlow was matching Marquez through the first two sectors of his flying lap, although the Brit dropped a bit of time in the third and something he never made up. Maverick Viñales was fourth fastest and just ahead of the factory Ducati pair of Jorge Lorenzo and Andrea Dovizioso.

Dani Pedrosa managed to salvage coming through Q1 and ended up in seventh place, just ahead of Johann Zarco and Aleix Espargaro.

Jonas Folger will head the fourth row and just ahead of Pol Espargaro who suffered a crash whilst trying to follow Marquez whilst Scott Redding rounded out the top twelve.

Alex Rins will start from thirteenth after just missing out on Q2 for the first time and he will be joined by Alvaro Bautista and his Suzuki team-mate Andrea Iannone on the fifth row. Hector Barbera will be sixteenth ahead of Jack Miller, Danilo Petrucci, Bradley Smith and Karel Abraham. Loris Baz, Tito Rabat and Sam Lowes round out the grid.