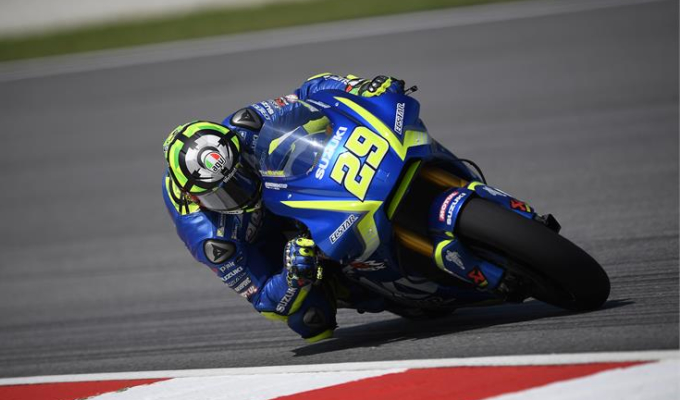 Andrea Ianone topped a surprising front three through the first session of the final weekend of the 2017 MotoGP season in Valencia.

The Italian who enjoyed a strong trio of weekends over the previous three flyaway races looks set to continue this weekend after taking advantage of the softer option rear Michelin tyre to lead the way after the opening session.

Behind the factory Suzuki rider was Marc VDS’ Jack Miller. The Australian rider who will be moving over to the Pramac Ducati team for next season himself took capitalised on the soft rear tyre, taking the lead momentarily only to crash out unharmed a few corners later. Pol Espargaro was third fastest after he set his fastest time also on the soft tyre.

World Championship challenger Andrea Dovizioso was fourth fastest one spot of Marc Marquez who was the fastest rider not to trial the soft Michelin rubber. Maverick Vinales salvaged what was looking like a disasterous start to the weekend for Yamaha by jumping into sixth position, just ahead of 2017 MotoGP Rookie of the Year Johann Zarco.

Cal Crutchlow was eighth on his LCR Honda whilst Mika Kallio – once again wildcarding on the KTM – was ninth with Dani Pedrosa rounding out the top ten.