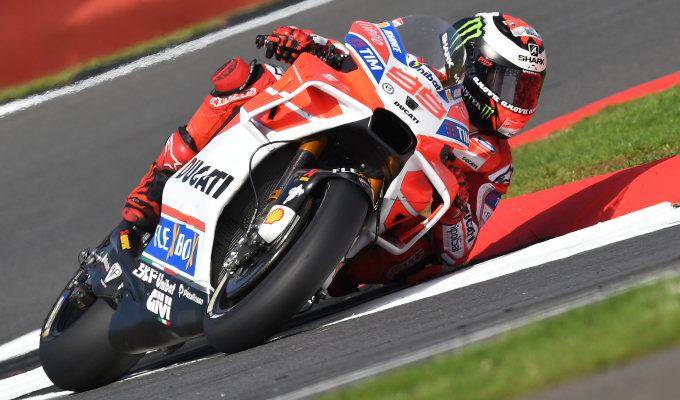 Jorge Lorenzo appeared to be frustrated after his first bike broke down, if that was motivation for a flying lap at the end of the session on his second bike, it worked at the Spaniard topped free practice four by over six tenths of a second.

The Spaniard was down in fifteenth when his bike broke down at the far end of the circuit. After running to Julian Simon who was waiting for him on a scooter, Lorenzo stormed into the Ducati pit, unhappy with the fact he had to go out on his second bike, fully equipped with a soft rear tyre.

Channeling that frustration, Lorenzo flew to a 2:01.060 which was 0.658 seconds ahead of his team mate Andrea Dovizioso who was in second position. Cal Crutchlow was third fastest as he hopes to replicate last years Saturday, albeit in conditions that couldn’t be less similar to 2016.

Marc Marquez was fourth fastest from Maverick Viñales, who despite fitting his own soft rear tyre, couldn’t manage anything better. Johann Zarco was fifth and looks as if he will be a podium threat once again tomorrow, whilst Alex Rins was a pleasant surprise in sixth after following Marquez for the majority of that session.

Iannone was seventh and will be hoping to transfer that pace into Q1 whilst Valentino Rossi was eighth as he struggled at the end of the lap. Danilo Petrucci, Tito Rabat and Pol Espargaro rounded out the top ten.