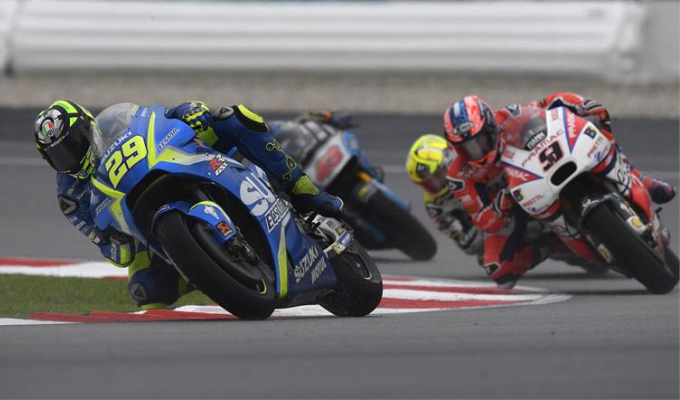 A storm shortly before the MotoGP race ruined the progress made by Andrea Iannone over the weekend in Malaysia.

The Italian had enjoyed a positive couple of weeks over the fly away races with fourth and sixth positions in Japan and Australia respectively and looked set for another strong performance in Malaysia, after ending the morning warm up session in fifth.

However, just before the commencement of the MotoGP race, a heavy rain showered threw all data gained over the weekend up in the air. With a soaking wet track, the Italian admits that the race was little short of a disaster with the bike suffering from a lack of grip and lack of feel in both the front and the rear of the bike.

“It’s hard to find the words to describe this race. In the wet everything got complicated and it was very hard to ride,” said ‘the Maniac’.

“It’s a shame because this morning in the warm-up we were very fast. We were confident and positive; we could have had the chance in race to fight for important positions. Until this morning we managed to improve the machine.

Not deterred by eventually ending the race in 17th position, Iannone was fully aware of the progress made over the weekend with the GSX-RR.

“So, despite the race we have done a good job. In race the bike was very hard to ride. I couldn’t even stand up; I felt no grip either at the front or at the rear. In these conditions it was very hard to compete.”