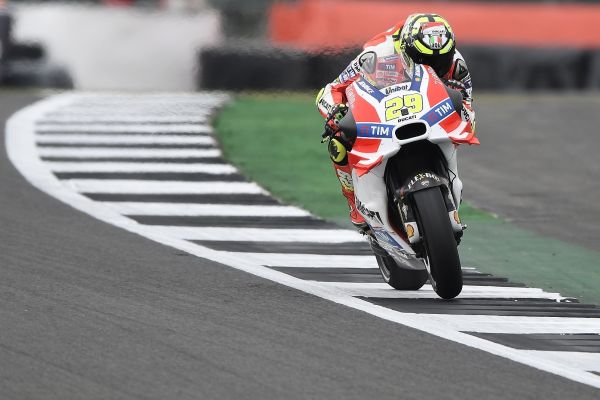 Factory Ducati’s Andrea Iannone has said that he doesn’t anticipate any arm pump issues this weekend in Misano, after the injury plagued the Italian at Silverstone last weekend.

Iannone was running in a strong second place at Silverstone when he low-sided at the final corner in the closing stages of the race, tucking the front after hitting a bump. Iannone then revealed he has was suffering from arm pump, saying he was only riding with one arm and at “80%”.

“I don’t think I will have any problems with my forearm in the Misano race. I haven’t suffered with arm pump since my operation in 2013 and now I’m confidently looking forward to our home race,” said Iannone.

With the Italian hoping he won’t be facing any arm pump issues, he will be hoping to enjoy his final race with the Ducati in front of Italian fans. ‘The Maniac’ will leave Ducati at the end of the season, moving to Suzuki where he will replace the Yamaha-bound Maverick Viñales. With all of the laps Ducati have completed around the Misano circuit, Iannone will be hoping to improve on his best finish of fifth place at Misano.

“The weather conditions should be better than in England and this will allow us to make constant progress during the weekend. I think the Desmosedici GP can be competitive at this track, two weeks ago we had a test there that gave good results,” he said.

“It’s true that we didn’t have any of our main competitors to compare with, but the feeling was very good and I think we have a good chance of doing well in the race.”