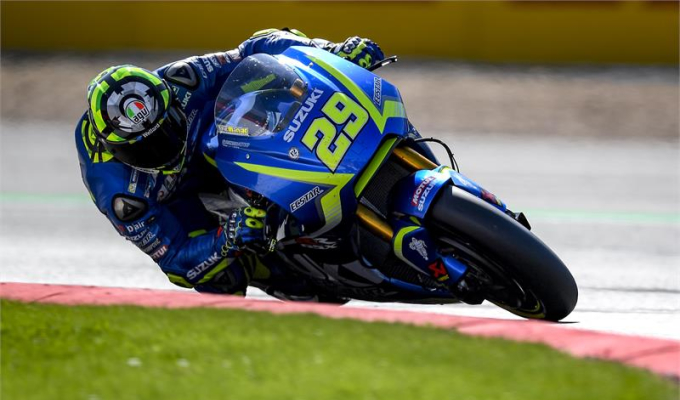 The Maniac completed his fastest lap of the session following Maverick Viñales who had the fourth fastest time but showed good consistent pace, confirming the belief that he will be a serious challenger to Marquez for this afternoon’s 20-lap British Grand Prix.

Iannone will be encouraged with surprisingly high temperatures for warm up, Iannone using a hard front and rear combination put in a 2:01.622, which was 0.009 seconds ahead of second placed. Cal Crutchlow looks as if he found some of the grip that deserted him yesterday and he will be hoping that his warm up pace will be a sign he can stick with Marquez.

Valentino Rossi was fifth fastest and he was just ahead of the satellite Yamaha of Joahnn Zarco. Aleix Espargaro who is battling an injury sustained from go karting was seventh in limited laps just ahead of Dovizioso, Rins and Lorenzo who rounded out the top ten.

Dani Pedrosa was seventeenth as he continues to struggle with the large bumps formed by the F1 cars around the circuit and he will be hoping to find a rhythm early with the leaders are he salvaged something by qualifying in seventh for this afternoons race.

Jonas Folger suffered a scary crash at the end of the hanger straight and had to be taken to the medical centre for further checks. Early word is that he hasn’t sustained any serious injuries but it’s not clear whether he will be able to compete in the race later this afternoon.